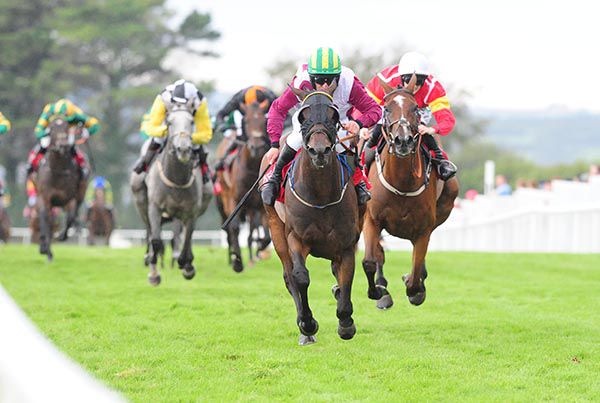 Great Trango picked up plenty of compensation for a luckless run in the amateur riders' handicap on Monday, when coming home best in the 120,000 euro Grade B handicap hurdle at the Galway Festival.

Phillip Enright's mount jumped the final flight in second in his pursuit of Ask Susan and he soon switched to the inside of that rival to deliver his challenge.

He overwhelmed Ask Susan halfway up the run-in and galloped home by a length and a half at 12/1.

Runner-up Ask Susan was a 7/1 chance with Great White Shark the 3/1 favourite, back in third after a less than clear route. Neverushacon completed the placings in fourth at 16/1.

Harry Kelly said: "That's my biggest win and the plan from 12 months ago was to run in the amateur handicap on Monday and this race on Saturday. Nothing went right on Monday and it was just a disaster and I went home sick.

"But it was no one's fault and Jamie (Codd) looked after the horse and that's what you get when you get the best; when things go wrong they look after them.

"There is nobody better off a light weight than Phillip (Enright) and he is a jockey always trying for you. There were no stalls tonight and the plan was to jump off good and handy and Philip was great on him all the way.

"He is one of the toughest horses in training and I'm very grateful to the owners for buying him. The Donohues have been great and he was bought as a replacement for Lagostovegas and he's not a bad replacement.

"He was beaten seven and a half lengths on Monday; we lost four lengths coming out of the stalls and he was last for a horse who needs to be prominent.

"Jamie said to run him again if he gets the ground at the end of the week, and said 'I hate to say it, but he did a lovely bit of work for you during the week!'"