Halford happy to send out another first time scorer 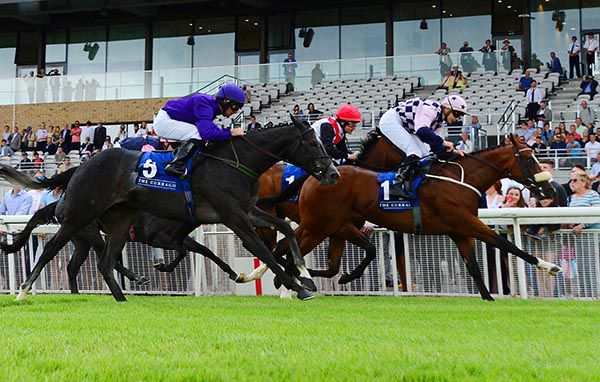 There was a surprise in the opening Barronstown Stud Irish EBF Maiden at the Curragh when Michael Halford’s Roman Turbo struck on his debut at odds of 25/1 (from 33s).

Ronan Whelan rode the Sammy Hon Kit Ma-owned Holy Roman Emperor colt and he held the staying on Papa Bear by half a length.

The runner-up was a 10/1 shot and to complete a puzzling result all told 25/1 hope Howling Wolf completed the frame a head back.

“He's a lovely smart horse. We thought he was ready to start, and thought he'd run well, but we weren't sure if he was good enough to win a Derby weekend maiden,” said Halford.

“He was professional. He had the benefit of running in a barrier trial at Naas and I suppose that was as good as a run to him.

“We thought this was a nice place to get him started, on a nice track. Ronan said he just took a heave with him and got a little bit tired. I'd say he's smart.

“I thought he'd come on from it as he's like me he thrives.

“We'll step him up now and could look at something like the Angelsey.

“He's very straight-forward and Ronan said when the gates opened he knew what to do.

“The owner is from Hong Kong. We had a horse for him last year, Little Turbo, and he won for us last year. He has two with us this year.”

The Irish Horseracing Regulatory Board Veterinary Officer examined Royal Dornoch trained by A.P.O'Brien, at the request of the Stewards and reported the animal to be post race normal.