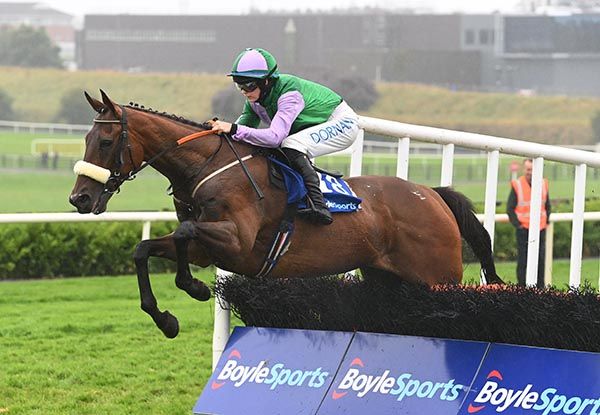 Hallowed Star took a marked step up in trip in his stride in the Grade B Handicap hurdle at Galway over an extended 2m6f.

It paid to be out in front on this testing ground as several horses departed in behind at the third-last. Digby who was a close pursuer crashed out and Finest Evermore made a bad mistake and dropped through the field. Both incidents inconvenienced others in the field and led to horses being brought down.

Hallowed Star lobbed along and soon increased his advantage over Perfect Attitude He was clear two out at which he was less than fluent at, and was soon galvanised by Rachael Blackmore to climb the hill.

The pair were well clear at the last as the field toiled in its efforts to get into the race. Blackmore kept the 8/1 shot up to his work to win by a very healthy 17 lengths. Happy Jacky took second at 16/1 with Mars Harper (33/1) and The Little Yank (22/1) completing the placings in third and fourth respectively in this €110,000 race.

Trainer Shark Hanlon said: “Rachael was super and the horse was super. He was keen in her hands and she had the brains to let him roll on. When you are up there you are out of trouble.

“She was very good on him, as she is on them all. She rode one of her first winners here for the Mees on Camlann so it's great to have her back in the colours and get another winner for them.

“For me it's some week to win two feature races in Galway. We have only a small team of horses and to have two features going home is unbelievable.

“I have to thank the staff at home and Rachel, my partner. Without them I'd be no-one and it's the same with every trainer, without the staff they are no-one.

“It's a tough time with staff, expensive times. For any small trainers out there I'd say keep at it because you'll get there.

“This means so much to everyone that is involved in horses. It's a tough time on owners as well because everything has gone so expensive.

“It's a good crowd today and the other day they were five deep all around when Hewick won (Galway Plate). It's unreal and when they see a small trainer winning they are always there to support them.”