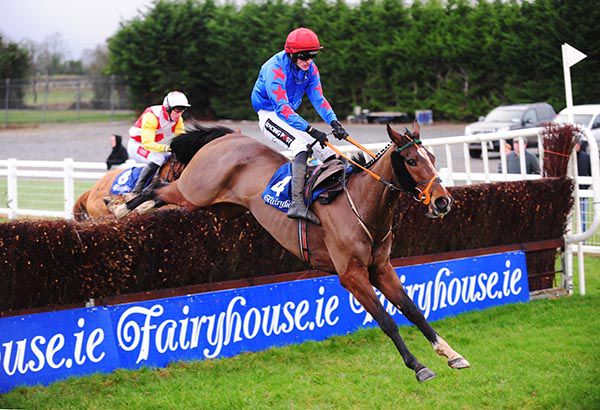 John ‘Shark’ Hanlon is eyeing a crack at next month’s Betfred Eider Chase at Newcastle with Kilkishen after his win at Fairyhouse over Christmas.

He won over an extended three miles — but Hanlon believes Gosforth Park’s real test of stamina will bring the best in his nine-year-old on February 23.

“He needs a trip, and the Eider seems to be ideal for him,” said Hanlon.

“There are a couple of options in Ireland coming up, but our mind is sort of set on the Eider.

“Ground doesn’t matter, good or bad is fine — it just took us a while to get his jumping right, but now we have it.”

Hanlon is hoping Kilkishen retains a favourable mark for his trip over.

“He went up 7lb in Ireland, I’m not sure about England yet — if they don’t kill him he’ll definitely go for it,” he added.

“There aren’t many options over four miles. The other day he won over three miles, but he (Danny Mullins) couldn’t pull him up — he went another half a mile.”