Have Hogan on your side on New Year's Eve 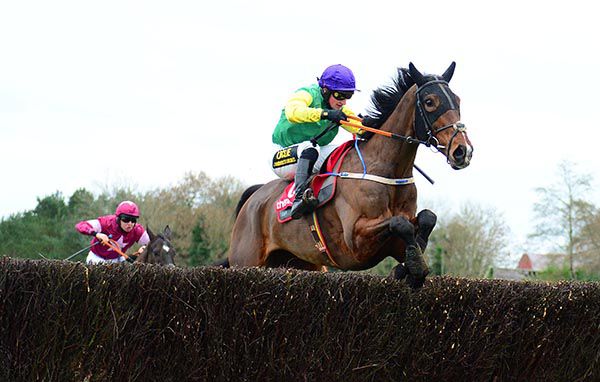 Denis Hogan is the man when it comes to Join us in the New Year on thetote.com Handicap Chase at Punchestown and he struck again in this year's renewal of the two miler training and riding the victor, Barna Venture (5/1 into 7/2 co-favourite).

Luke's Benefit did the Tipperary handler proud by winning this event in 2011, 2012 and 2013 and today Barna Venture beat his fellow market-leaders Whatsinthecorner (5/1 into 7/2) and Monatomic

The margins at the line were four and three parts of a length and four and a quarter lengths after the successful Trans Island gelding had led before the last before soon stamped his authority on proceedings.

“That was great for Brid and Frances (Collison, owner/breeders) who are next door neighbours of mine,” said Hogan.

“This was a difficult horse but he's actually starting to settle well. Fair play to Shane Mulcahy who did all the hard work with him.

“He got injured off this lad in Naas, he fractured his sternum, so he left the ride for me today.

“I'd never ridden him in a chase but when I saw the decs yesterday morning I thought he had a big chance.

“He ran very well behind Seskin Flyer in Thurles and the winner franked that form in Limerick.

“It's great and they are all running well. I needed that as I got a few penalty points on the way up the road, so that will pay for that!”

P. Townend, rider of Well Tom trained by Aengus King, reported to the Clerk of Scales that his mount made a mistake at the second last.