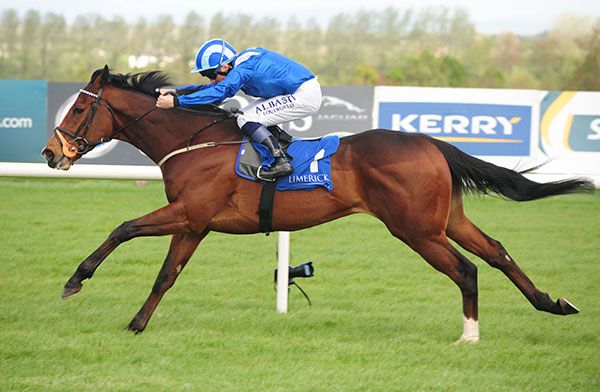 Jassaar off the mark in Limerick
© Photo Healy Racing

Jassaar shot clear in the final furlong to put Limerick's mile maiden away and gave Chris Hayes a double on the card.

From fourth a furlong and a half out, the 7/4 favourite was shaken up and responded in good style to hit the front just over a furlong out.

He quickened away well in the final 150 yards to win decisively by three and three quarter lengths for Dermot Weld. Khafaaq came in second at 20/1 by half a length from Papal Count (28/1).

Chris Hayes said: "He did what we were expecting him to do. He travelled nicely, it was a bit messy and stop-start but I rode him like the best horse in it and thankfully he quickened up well and put it to bed easy.

"At Gowran I made too much use of him; I'm only a short time in Rosewell (House) so I'm still trying to learn!"