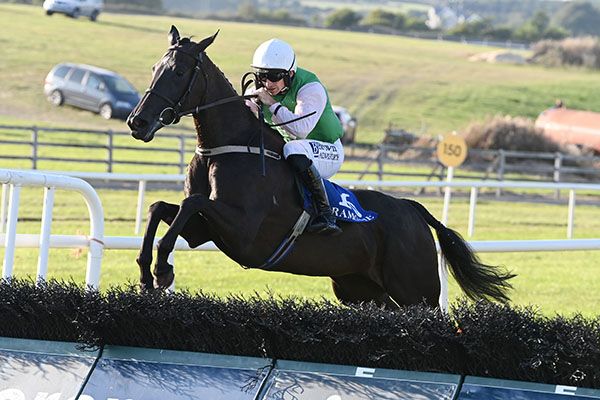 Historique Reconce who got in as first reserve, ran out an impressive winner of the MM Halley Solicitors Mares Maiden Hurdle, scoring under Patrick Mullins for his father Willie and mother Jackie.

A daughter of Lauro, she failed to trouble the judge in five outings in her native France and was making her Irish debut this evening.

Sent off a 7/4 chance, the five-year-old, who is a half-sister to the mighty Chacun Pour Soi, was settled in mid-division on the outer, taking closer order from the third last.

She went in pursuit of the leader before the next and cruised through to lead approaching the final flight, going on to score by two-and-three-parts of a length. Beechroad Winnie (33/1) kept on well to take second under James O'Sullivan for Philip Rothwell, while Twoplustwo Equals was a neck away in third.

The Paul Tobin-trained latter was the subject of a massive gamble. From early shows of 80/1, the Westerner bay eventually went off the 5/4 favourite under Danny Mullins.

"They said she was just too weak in France last year. In France there is not much of a programme for the older horses so we took a punt with her pedigree that she would make a nice broodmare. Obviously to get that win is very important.

"It was a great opportunity and that's what I thought she might do.

"I couldn't understand how we weren't favourite. I was wondering what this other horse (Twoplustwo Equals) was. The Nolan horse (Dot Cotton) was the one I was actually more worried about.

"She only had to run to 105 to win there and we'd like to think she is better than that.

"I just wanted to keep it very simple so I followed Danny (Mullins), I didn't want to be getting knocked down. They went a good gallop and Danny is often the man to follow so I took plenty of pleasure passing him out."