Hit The Silk bounces back to form 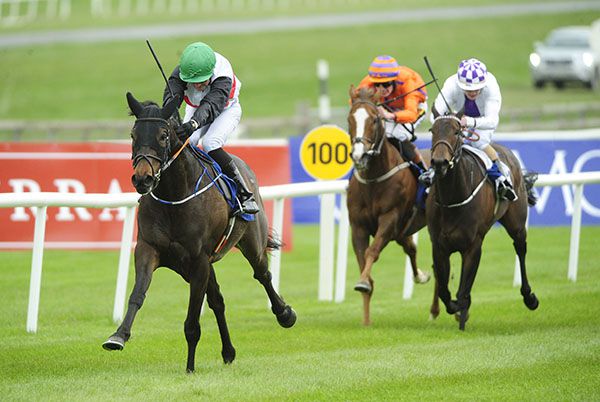 Hit The Silk bounced back to form as he took the Curragh Training Grounds Apprentice Handicap, scoring under Ger O'Neill for Pat Murphy.

O'Neill, who rode thirty-five winners in the UK, was registering his first in Ireland aboard the son of Majestic Missile.

A shock 50/1 winner at Limerick in October of 2017, the six-year-old gelding failed to make a significant impact in eight starts since.

Down to a career low mark of 73, he was sent off a 14/1 chance this afternoon in the colours of owner Derek Leonard.

Settled in mid-division, he made headway from two furlongs out, and came through to lead with over a furlong left to race.

He was ridden and kept on well in the closing stages, going on to score comfortably by two and a quarter lengths. Stellaire Enfant (16/1) finished second under Adam Farragher for Peter Fahey, while Beckwith Place (25/1) and Bobby Jean (20/1) were third and fourth respectively.

The Richard O'Brien trained Global Pass was sent off a well-backed 13/2 favourite (from 12s on-course) and he finished last of the twenty-three runners.

Murphy, who is based in Co Kilkenny, said afterwards: "We tried a hood on him the last day and he kind of fell asleep with it so we rode him more at home with it just to take the fizz out of him. It seems to have worked for him today.

"The ease in the ground helped and I think the straight track helped as well because he just gets a bit keen when he's tight upsides.

"We always thought a lot of him. His mark has dropped down but it was more his head that was the problem as he was running too free and not using himself properly in his races. We had to work a lot on that at home.

"He has ability and if he could just settle and do his job he would be a great horse."

At the request of the Stewards, D.N. Curran, rider of Treble Cone (GB), trained by Gerard Keane, reported to the Stewards' Secretaries that he had to check his mount in running. .

The Stewards interviewed Mr. P.J.F. Murphy, trainer of Hit The Silk, into the apparent improvement in form of his charge. Mr Murphy reported that his charge met with interference the previous day in Limerick, he felt his charge is better over 7 furlongs, he also added that the application of a hood, his charge settling much better and the straight track today all helped to bring about the apparent improvement in form. Mr. Garry O' Gorman, The I.H.R.B. Handicapper, also gave evidence. Having considered all the evidence, the Stewards noted the explanation offered.