Holden rewarded with win on Loch 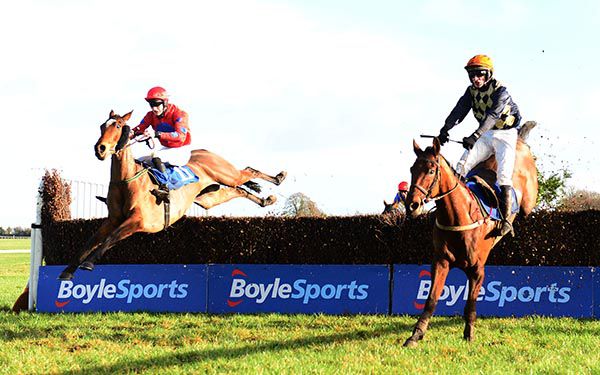 Loch Luatha battled gamely to get up on the run-in and land the spoils in the Molony Cup Handicap Chase at Thurles.

Leslie Young's charge, a former point-to-point winner, stepped up to the extended three mile trip today having been fourth over two-miles-five at Tramore nine days ago.

Daniel Holden settled the 12/1 shot mid-division before taking closer order up the back straight.

The Mohaajir gelding was short of room turning for home but came to challenge Gunfire Reef approaching the last.

He recovered from a peck at the final fence to led in the closing stages and record a length-and-a-half win.

"On his Tramore run he was entitled to run well,” said Young.

“I was expecting a big run out of him and Daniel was a groomsman in a wedding in Sligo yesterday and made his way back to ride him at ten stone so plenty credit goes to him for doing that.

"Daniel knows him well and he jumps well for him.

"He's is at Limerick on Saturday, for one of those conditions' novice rated handicaps so we'll see how he is between now and then."