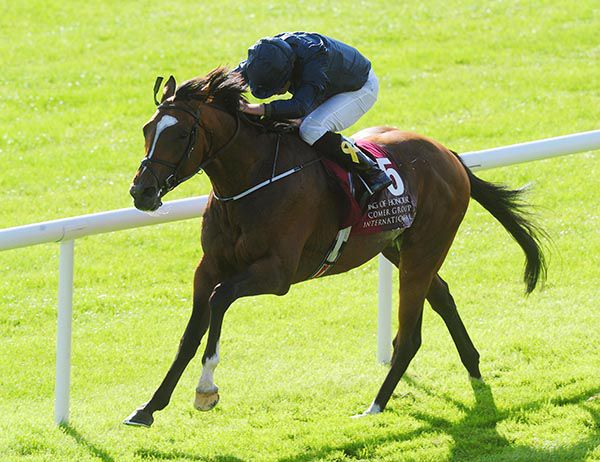 Flag Of Honour and Sovereign are among Aidan O'Brien's prospective candidates as 70 entries were published for the Comer Group International Irish St Leger at the Curragh.

Several heavyweight challengers may travel from Britain - including Wells Farhh Go, following his comeback win at the weekend.

Off the track for nearly a year, Tim Easterby's stable star made all the running under David Allan to win the Fred Archer Stakes comfortably at Newmarket on Saturday.

Last season, he had won the Bahrain Trophy and finished close up behind subsequent Melbourne Cup winner Cross Counter and St Leger hero Kew Gardens in the Great Voltigeur at York.

"He's come out of the race fine. He’s in good form, and it was pleasing to see everything is as it was — it was grand," said Easterby.

"You couldn’t have really wished for a better race for his comeback."

Easterby added: "He’ll either go for the Irish St Leger or the Goodwood Cup - we're not sure yet.

"Stamina certainly won’t be an issue for him — he’ll get two miles no problem.

"We are going to enter him in the Ebor, but we’re not sure about it yet — we need to decide. We’ve got lots of options, and just need to pick the right ones."

Sunday’s Grand Prix de Saint-Cloud winner Coronet, Lah Ti Dar, First Eleven, Weekender and Royal Line are in the mix for John Gosden in the Curragh Group One on September 15 — as is Stradivarius, the best stayer around at the moment.