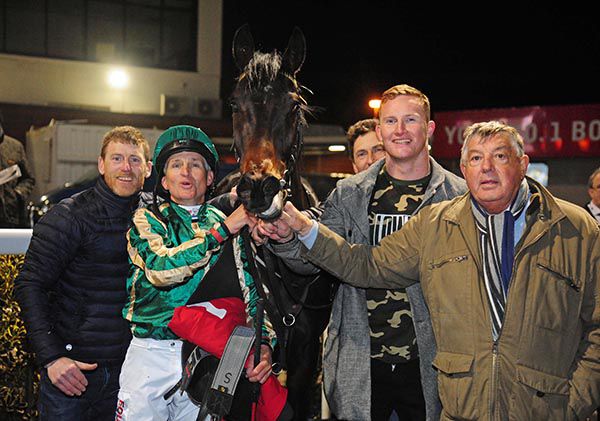 First time out of maiden company on his fourth start Ice Bullet landed a gamble in the Staunton Office Supplies Handicap at Dundalk.

The wanderings of Libras Power (eventual 2nd) made for a messy finish here, but Ice Bullet toughed it out best to score by a neck.

Niall McCullagh rode Ice Bullet for Johnny Murtagh, and he was backed from 3/1 into 7/4 favourite on the track. Much bigger prices had been availed of earlier on.

At 25/1 Tessiesee ran well for third, three parts of a length off the front pair.

“It's great to get a winner. It's been a long year and we haven't had a winner in a while so I'm delighted,” said Murtagh.

“He's rated 45. I'm trying to weed them out and I'm glad he got his head in front there because it's bottom of the barrel stuff.

“Niall said he seemed to get the trip well and hopefully he doesn't go up too much so he can come back here for something similar.

“He was rated 45 but he seemed to be going well at home. He's a small little horse and I think his future lies up here. If he wasn't competitive tonight he was in trouble.

“Ciaran Kilkenny owns a little bit of him. He should be resting up for tomorrow but we got him out for tonight. He was pretty excited and it's great to have him on board.”

The Stewards enquired into an incident in the closing staged involving Rain Or Shine ridden by D.P. McDonogh, Libras Power, ridden by S. Foley and Ice Bullet, ridden by N.G. McCullagh, where it appeared Libras Power hung right in the straight.

Having viewed the recording of the race and considered the evidence, the Stewards were of the opinion that any interference was accidental in nature and took no further action.