Ickworth out to follow-up in First Flier 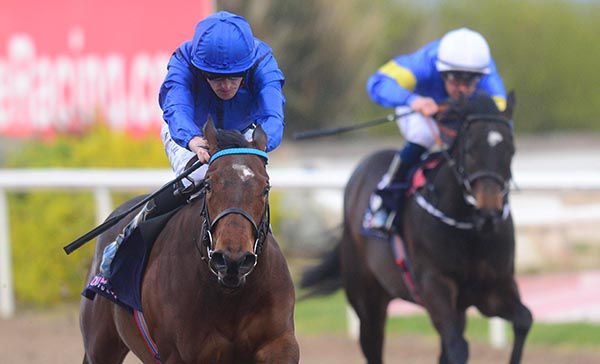 Ickworth will aim to maintain her unbeaten record in the First Flier Stakes at the Curragh.

Willie McCreery's Godolphin-owned filly made a pleasing winning debut at Dundalk in March.

The juvenile she beat, Jim Bolger's Moments Linger has since come out and won - and the pair meet again in Monday's Listed contest over five furlongs.

"She has a nice draw. She showed plenty of speed the first day, and hopefully she does again," said McCreery.

"She’s in good form, and I'm looking forward to seeing how she gets on - and it will be nice to run her on some nice ground.

"The ground will be lovely there tomorrow, because it will be fresh ground.

"Jim's horse franked the form, and you’d like to think ours will come on for her first run - because she seems to have strengthened up a bit."

The only other runner defending a perfect record is Aidan O'Brien's King Neptune - who bolted up by more than three lengths on his debut, also at Dundalk.

The War Front colt is one of only a handful of juveniles unleashed from Ballydoyle so far in 2019. However, they run two in the opening Coolmore Sioux Nation Irish EBF Maiden.

Ryan Moore rides Harpocrates - by Invincible Spirit out of a Galileo mare, just like Guineas winner Magna Grecia - while Seamie Heffernan is on Arizona a No Nay Never colt.