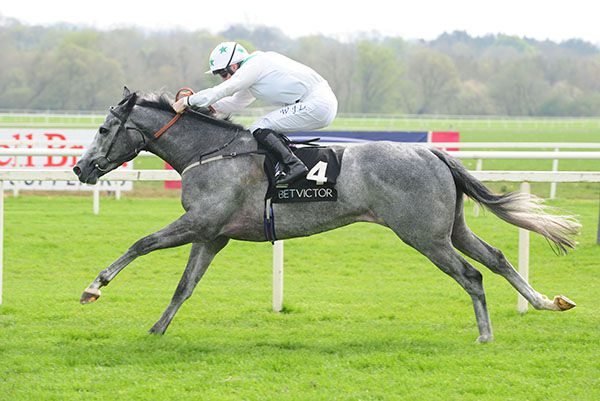 A drifter in the betting initially, Decrypt was hammered from 7/2 into 7/4 favourite for the BetVictor Bet #5 Get #30 Offer Race at Cork. Paddy Twomey's charge delivered in style in race four at the Mallow venue.

He may have been up to seven furlongs and having his first start since winning over six at the Curragh last June, but Billy Lee was clearly exhibiting confidence on the grey up the straight.

Those signals about the Dark Angel colt proved spot on as he asserted inside the final furlong to account for Manjeer and Klute by three lengths and a length and a quarter.

"He is a nice horse and I had this race in mind from a long way back. I was looking for it in the calendar and last year it was a furlong further and I was only ever going to come here," said Twomey.

"I did expect him to do that and he is a horse who physically got stronger and bigger in himself and I didn't feel it was the right thing to do last year by running him again (after his maiden win).

"He has length and strength and I asked Billy (Lee) and he said he would get a mile no problem.

"We'll see what we'll do and I have an idea in my head what to do with him but I wouldn't be frightened with the idea of running him in the Guineas; he definitely wouldn't run before the Guineas."

At the request of the Stewards, O.J. Orr, rider of Asdaa trained by D. K. Weld, reported to the Stewards' Secretaries that his mount met with unintentional interference in the closing stages.