In-foal Irina bounces back to form 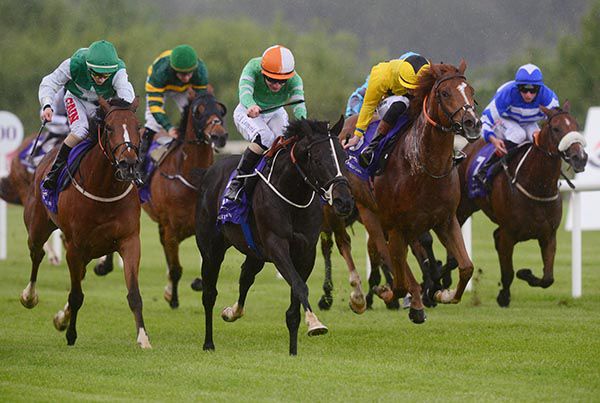 The Pat Martin trained Goodnite Irina bounced back to form in the Blizzards Handicap.

A winner at Down Royal a year ago this weekend, the daughter of Roderic O'Connor failed to make an impact on her next six starts.

Her last four outings were on the all-weather at Dundalk and back on turf this evening, she opened on-course at 10/1 before going off at 8s (was 14s this morning).

Settled behind the leaders by Killian Leonard, the bay five-year-old was ridden to lead over a furlong out and kept on well from there to prevail by a length and a half.

Colin Keane, seeking a quick treble, had to settle for second on Highly Approved (8/1), while Silk Cravat (9/1) was a neck away in third.

Recent Curragh winner Little Clarinet who was as short as 15/8 this morning, proved easy to back throughout the day and eventually finished fifth after going off the 7/2 favourite.

"She did it well. She's in foal to Aclaim," said Leonard.

"On her best form she's always run well fresh so I wasn't worried about her coming back from a break.

"I travelled away sweetly the whole way around. She loved the ground and when I asked her to quicken up two-and-a-half down she picked up fairly easy and done it easy enough.

"Hopefully we can get another spin into her and hopefully she can do a job again."

The Stewards interviewed K.J. Leonard, rider of Goodnite Irina, concerning his use of the whip in the latter stages of this race. Evidence was heard from the rider concerned. Having viewed a recording of the race and considered the evidence the Stewards found the rider in breach of Reg.10.3.(g)(frequency) and having taken his previous record into account suspended him for 1 race day.

C.D. Hayes, rider of Tomwontlisten trained by Miss Clare Louise Cannon, reported to the Clerk of Scales that his mount hung badly.