In-form Orr fires in another winner on Wild Shot 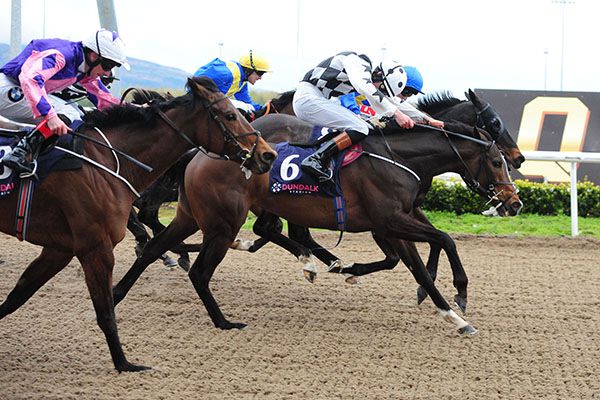 The very much in-form Oisin Orr struck again aboard Wild Shot in the Irishinjuredjockeys.com Handicap at Dundalk.

This was cruel luck for Sharjah bidding for a tenth course win, but the photo showed that he'd been 'nosed' out by the Cathal McGuckin and Noel Kelly-trained Wild Shot.

“I don't know if I'll drop him back to a mile-and-a-quarter now or whether he ran a bit flatter than last week.

“Oisin said he just didn't feel the same as he did last week, he was a bit flatter.

“I'd say we won't run him for a few weeks after that. He's had plenty of runs and he seems to run better fresh. We won't panic to run him again and might try and find something in about four weeks.

“He'll probably get another 4 or 5lb for that.

“The form worked out well from last time with the second winning during the week and that probably shortened his price a bit.

“We did alright last time though and we're not too badly off this evening. He doesn't owe me anything now.

“When I got him he was rated 47 and he'll be up around 60 now. That's not too bad an improvement.

“He'll probably go on grass during the summer and the owner is keen to have a runner at Galway.”

The Stewards enquired into an incident approaching the first bend involving Sharjah, ridden by A.J. Slattery, Mistiness ridden by R.C. Colgan, New Vocation ridden by W.T. Byrne, and Oromo ridden by B.M. Coen, where it appeared New Vocation ran out of room on the rails and Oromo was forced to check.

Having viewed the recording of the race and considered the evidence, the Stewards found R.C. Colgan in breach of Rule 214 by riding carelessly and having taken his previous record into account suspended him for one race day.