Innamorare gets a deserved win to her name 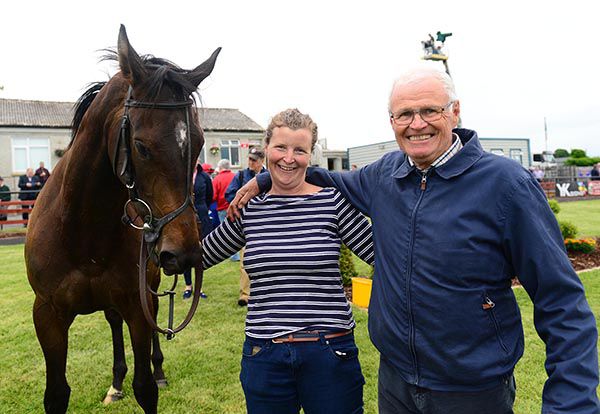 Innamorare got a deserved win to her name in the Roscommon Claiming Maiden.

Placed on her last three starts, and beaten by just a nose at Dundalk in May, the Clare Cannon trained bay certainly wasn't winning out of turn.

Sent off at 10/3, the daughter of Intense Focus was settled behind the leaders by Chris Hayes, and was pushed along in fourth from the two furlong pole.

She was ridden to lead over a furlong out and was soon pressed by Eadbhard pulling out more in the closing stages to oblige by three parts of a length.

Eadbhard (10/1) had to settle for second under Tom Madden for Shane Duffy, while Descendant (11/2 to 9/2 on-course) was another half a length back in third. Maricruz (12/1) finished fourth and she was later promoted to third after being hampered by Descendant (demoted to fourth) from the furlong pole. Daliyah was sent off the 11/4 favourite, and she finished seventh after being bumped over two furlongs out.

Owner Geoff Cannon, father of the successful handler, said afterwards: "She was bought on my account, unbeknownst to me, when I was in Italy hence the name Innamorare (translated to 'fall in love').

"She had been knocking on the door and was only beaten by a nose at Dundalk last month. We thought she had it then.

"It's a long way down from County Down to here. It was nearly five hours to get down here but it's been worth it. I'll go back happy!"

The winner was bought for just E2,000 as a yearling, and is out of a half-sister to I'm Supposin.

The Stewards enquired into an incident about one and a half furlongs from the finish involving Descendant (GB), ridden by S. Foley, placed third, Maricruz, ridden by R.P. Downey, placed fourth and Taylor Velvet ridden by R.P. Cleary, placed sixth, where it appeared that Maricruz was left short of room and checked. Evidence was heard from the riders concerned. Having viewed the recording of the race and considered the evidence, the Stewards were satisfied that Descendant (GB) had improved his placing over Maricruz by causing interference. They, therefore, reversed the placings of Descendant (GB) and Maricruz with the amended result to read; First - Innamorare, Second - Eadbhard, Third - Maricruz, Fourth - Descendant (GB). The Stewards considered the incident to be accidental in nature and took no further action.

J.A. Heffernan, rider of Rock In Society trained by S. Donohoe, reported to the Clerk of Scales that his mount lugged left during this race.