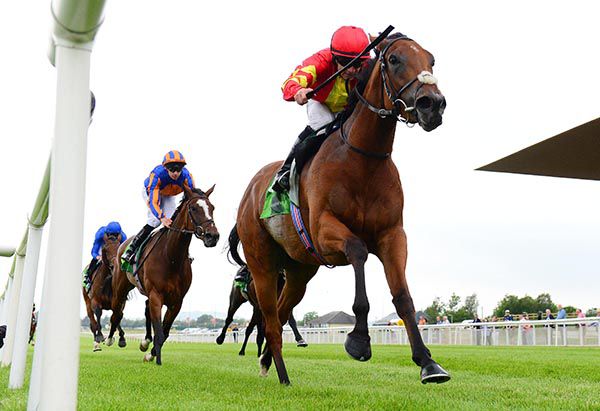 Joseph O’Brien admits only time will tell if Iridessa’s stamina will stand up to the test of the Kerrygold Irish Oaks at the Curragh.

A daughter of Derby hero Ruler Of The World, Iridessa finished fourth over a mile in the Irish 1,000 Guineas in May and appeared to improve for a step up to 10 furlongs when running out an impressive winner of the Pretty Polly Stakes here three weeks ago.

She takes another step into the unknown over a mile and a half on Saturday, as she bids to provide her trainer with a second Classic success, following the Irish Derby triumph of Latrobe last summer.

“Iridessa has come out of the Pretty Polly Stakes well and she didn’t look like she was stopping that day, so we are looking forward to it,” said the Piltown handler.

“We were over the moon with her in the Pretty Polly, and she really thrived on the step up in distance that day. We think going further this weekend will probably be fine for her as well, but it is always a bit of an unknown — how they will get the extra two furlongs.”

Aidan O’Brien has already saddled five winners of the Irish Oaks, and holds a strong hand in search of his sixth.

Pink Dogwood has arguably the best mile-and-a-half form on offer, having been beaten just a neck in the Investec Oaks at Epsom, but was three and a half lengths behind Iridessa in the Pretty Polly on her latest outing.

The Ballydoyle maestro also saddles Epsom third Fleeting — who has since finished second in the Ribblesdale Stakes at Royal Ascot — and recent course winner Peach Tree, who seems likely to be deployed as a pacemaker.

O’Brien said: “Fleeting seems to be fine since Ascot, and everyone is happy with her. Both Fleeting and Pink Dogwood ran close together in Epsom and ran very well and have run well since then, too.

“I thought Pink Dogwood ran very well the last day in the Pretty Polly, but she is going back up in trip again — we’re looking forward to it.”

The British challenge is headed by Star Catcher — supplemented for 40,000 euros off the back of her comprehensive defeat of Fleeting in the Ribblesdale last month.

Trainer John Gosden is bidding for a third victory in the race following the recent successes of Great Heavens (2012) and the brilliant Enable (2017), while jockey Frankie Dettori has four Irish Oaks wins on his CV.

“Star Catcher seems in good form but she’s got to take on the very best now. She won her Group Twp at Ascot, but Classics are very hard to win. We’ll be trying our very best,” said Dettori.

“Her home work has always been good, and Ascot wasn’t a surprise to us because she has taken a good step forward every time she ran.

“She’ll have to do that again to feature in the finish on Saturday. But at the moment all the home work has been very good, and I can’t wait to get back to the Curragh again.”

Ralph Beckett fires a twin assault, with Epsom fourth Manuela De Vega joined by Antonia De Vega, an impressive winner on her seasonal reappearance in a Listed event at Newbury.

Harry Bentley has sided with the former, with Colin Keane taking the ride on her stablemate.

Beckett said: “Both fillies are in good form, and the drop of rain they’re getting will help. Their recent work has been up to scratch, and they are going into the race in good shape.

“Manuela De Vega would look the one at this stage, but it might be a different story come Saturday night. On the evidence we’ve seen so far, I think Harry has chosen right, but my record at predicting these things is not the best.

“I’m much happier with Antonia De Vega now than I was going to Newbury, so we’ll see.”