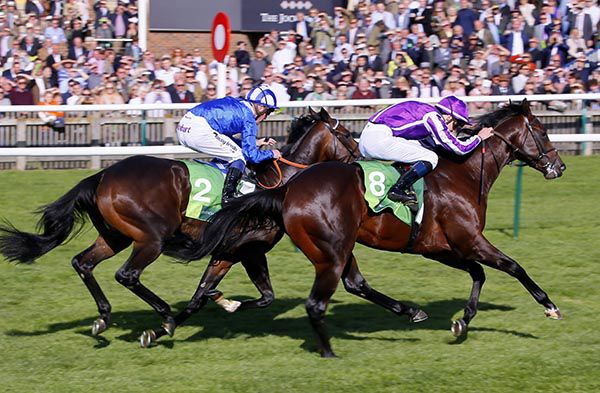 Simon Crisford feels Jash should have no problem handling a step up in trip when making his seasonal debut in the Betway King Charles II Stakes at Newmarket on Saturday.

Having already missed a number of potential starting points, the son of Kodiac faces seven furlongs for the first time on his eagerly-awaited return in the Listed prize.

The Shiekh Hamdan Al Maktoum-owned colt has not been sighted since losing his unbeaten record in finding only Ten Sovereigns too strong in the Middle Park Stakes at Newmarket in September.

Crisford said: "Jash has taken a long time to come to himself this spring. He has been working very nicely over the last few weeks and that has brought him forward to where we want him. I’m very happy with him going into the race.

"The purpose of taking him to the Rowley Mile a few weeks ago was to get him moving and stretching his legs. We never asked any questions that day, but he moved up well.

"Obviously races like this are competitive, but this is a good starting point for him. As far as we are concerned he should get the trip and it is the ideal distance for him.

"He doesn’t have the physique of a sprinter. He is a long-striding horse that covers a lot of ground and has got a great mindset."

Far Above takes the "next logical step" after a winning debut over course and distance at the Craven meeting.

Trainer James Tate said: "To be honest what has been most impressive is that his home work has been very good and he didn’t do anything wrong on his first run at Newmarket.

"This was the next logical step, but it is not an easy Listed race with the likes of Jash in there. He has got a lot to learn and lacks the experience of other runners in the field, but he will only gain such experience in races like this.

"He had already worked on the grass next to the track before his last run and he handled the course well.

"I do think his ideal ground would be with a little bit of ease in it, but he had no problems on the ground last time.”

The drop back in trip from the mile of the Qipco 2000 Guineas is expected to play to the strengths of the John Gosden-trained Azano, provided the ground does not become too quick.

Jockey Robert Havlin said: “An easy mile or seven furlongs is probably the best trip for him. He will come forward for his last run and he seems to be in good form.

“He travelled well in the Guineas and then we realised at about halfway that we were probably not in the right place.

“The only slight worry I have about it is the ground becoming really quick, as I think he is a horse that prefers a little bit of ease in it. He is in good form, though, and the drop back to seven is a positive.”

Glorious Lover may have work to do on ratings — but trainer Ed Walker remains optimistic there is plenty left to come from the Tamayuz gelding.

He said: “Glorious Lover is a nice horse, he ran well on his reappearance and I think he will improve from that.

“This will point us to which direction we go at Ascot, either for the Jersey or Britannia. The gelding operation over the winter seems to have done him the world of good. I think he will stay a mile, but seven is fine for the time being.”

The field is completed by the Richard Hannon-trained Watan.