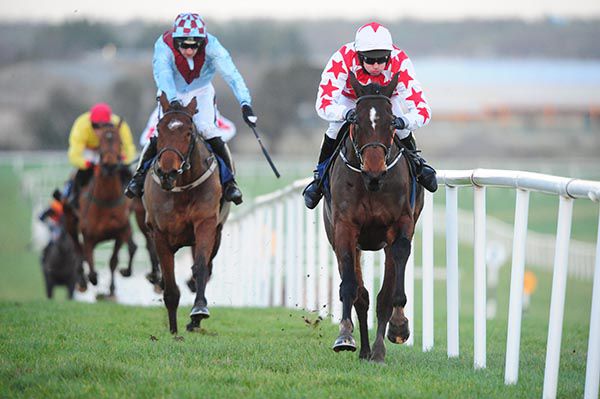 The National Hunt Breeders Supported By Tattersalls Mares Novices' Hurdle at the Cheltenham Festival has been identified as a target for Jeremys Flame.

The Gavin Cromwell trained six-year-old was an excellent second in the Grade 1 Tolworth Novices Hurdle at Sandown on her most recent start and is likely to be turned out again before the Festival in March.

"Jeremys Flame is in good form and it was a great run in Sandown. The winner was by far the best horse in the race but she definitely didn’t disgrace herself," said Cromwell.

"She ran a very creditable race. She travelled and jumped very well.

"I've entered her in the mares handicap at the Dublin Racing Festival in Leopardstown. She's not a certain runner and the Mares Novice at Cheltenham is the target.

"She's been busy enough all season and is going in the right direction.

"The Solerina in Fairyhouse (on January 25th) is another option and I’ll probably make an entry and have a look. She’s been placed in four black type races and I’d like to win one with her."

Cromwell went on to discuss plans for Alfa Mix who landed the valuable Grade B Tara Handicap Hurdle at Navan last month.

"Alfa Mix is a likely runner in the Navan Handicap Hurdle on Saturday.

"He won a nice pot over the same course and distance before Christmas so I suppose it’s a case of if it’s not broken don’t fix it.