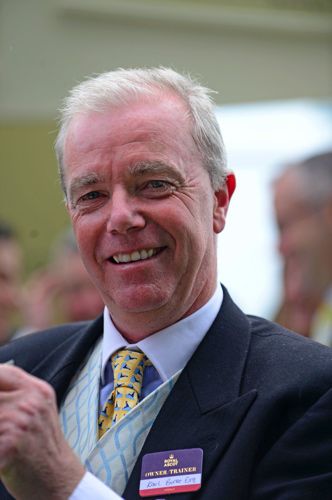 Karl Burke expects to find out which direction he will be taking in the future with the promising Kadar after he runs in the Bet365 Feilden Stakes at Newmarket.

Kadar was a winner of his only start at two, and Burke was dissuaded on more than one occasion from giving him a second run at the end of last season because of concerns about fast ground.

He also had the option of the Craven Stakes over a mile on Wednesday — but the Leyburn trainer feels the son of Scat Daddy will be seen to better effect over middle distances, so he starts his Classic season over nine furlongs.

The Listed race launched Golden Horn on the way to stardom in 2015.

“We’ll learn a lot about him tomorrow. Obviously it’s only his second time on the racetrack,” said Burke.

“I’ve said plenty about in the last year — probably too much — but I think he’s a lovely horse.

“I hope I’m wrong, but he is just showing that a mile in the top grade might just catch him out for a turn of foot — which is why I’m happy to run him over an extra furlong.

“For me he’s a mile-and-a-quarter-horse plus. If he wins then we have the option of coming back for the Guineas, because he’ll have had a look at the track as well.

“We’ll learn a lot — but he’s a lovely horse, and I’m very happy with him. Our horses have been running generally well without being in sparkling form — and like a lot of people, we’re just finding out feet at the moment.

“I hope the ground will be fine, with it being the first meeting. I was probably over cautious last year — he was a big baby of a horse, but he’s much more mature now. It’s so easy to do damage with an immature horse, but in my experience the longer you can leave them the more mature the bone is.”

Aidan O’Brien, who has never won the race, runs Western Australia — third in the Futurity Trophy at Doncaster, but beaten on his return to action at Dundalk.

John Gosden is represented by Kick On, sixth in the Doncaster race — while Richard Hannon runs Walkinthesand, narrowly beaten on his debut at Sandown before returning there to win his second start easily.

Mark Johnston’s I’ll Have Another picked up black type last year, and that is the aim again.

Assistant trainer Charlie Johnston said: “She was second in the Zetland Stakes here last season, which is very good form.

“I think this trip will probably be a real minimum for her — I think she’ll want a mile and a quarter and soon a mile and a half.

“She had a great year last year, picking up plenty of black type at home and abroad.

“She’ll have to step up again to warrant going in an Oaks trial. But we’re hoping she can, and this looked a good place to get going.”

Gosden runs Azano in the Bet365 European Free Handicap, and he had his Horris Hill form boosted in no uncertain terms when the winner Mohaather won the Greenham on Saturday.

Johnston’s Arctic Sound gives weight away all round, having won four of his six races last season.

“Arctic Sound was in all the trials — he was in this, the Craven and the Feilden,” said the trainer’s son and assistant.

“We stepped him up to a mile in the Stonehenge at Salisbury last year and expected him to win, but he was very disappointing. We then brought him back to seven furlongs for his last two runs of the year, and he was very impressive.

“We thought about stepping him back up to a mile with a view to having a crack at a Guineas — he’s in all the Guineas’ across Europe — but when you looked at all the races it was pretty clear the Free Handicap was going to be the least competitive.

“He’s a course-and-distance winner, and I’d like to think he’s the one they all have to beat.”

The Johnstons also run Victory Command, who has been disappointing in Dubai.

Ed Vaughan’s Dubai Dominion ran in some hot races last year — but his trainer feels he was over the top in the last of those in France when behind Kevin Ryan’s East, who ran so well at the Breeders’ Cup.

“I’ve been happy with him through the winter, and this looks a good starting point,” said Vaughan.

“He’d been on the go a little and he disappointed in France for no reason. He was beaten after a furlong, and I don’t know why because that’s not him.

“His work has been good, and I’m looking forward to to getting him out. I’ve a feeling a strong run seven furlongs is his best trip.”