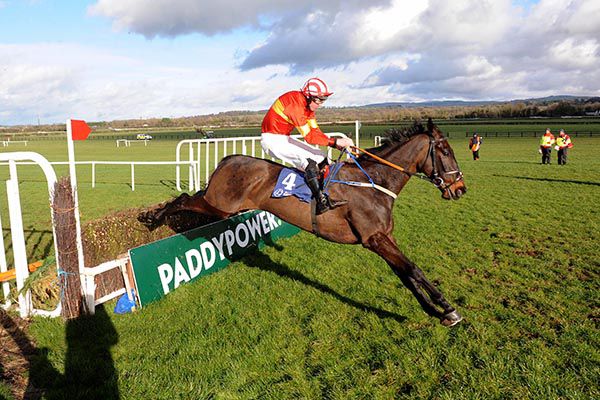 American based jockey Jack Doyle was on the mark in the Naas Directors Plate Novice Chase at Naas today as he partnered his father Pat Doyle's Kaiser Black to win the Grade 3 contest.

The American national hunt winter break has allowed Doyle to return to Ireland in recent weeks and having steered Kaiser Black to a second place finish in a Grade 1 race at the Dublin Festival, also bagged a winner at Clonmel last month before today steering Kaiser Black to victory in the dramatic four-horse race.

There was early drama as second-placed Jetz blundered and unshipped Robbie Power at the first while that loose horse then hampered and effectively ended the chances of Robin Des Forets at the next, as Robin Des Forets became badly detached and in the end trailed home a distant third.

At the business end, jockey Doyle moved Kaiser Black past leader Camelia De Cotte after the second last and the partnership then galloped to a comfortable 11 lengths win.

Winning jockey Jack Doyle later stated “he was always travelling well and he jumped super. He kept gaining lengths in the air. He wasn't mad about the ground today, it's probably as soft as he would handle it.

“From jumping the third last to turning in I wanted to try and sit as long as possible and probably ended up getting to the front too soon but there wasn't a lot I could do about it. He won very well in the end.'

On his previous runner-up effort at Leopardstown he added “we knew he was in great form but it probably surprised us and we hadn't him fully wound up that day.

“We went there looking for a bit of nice ground, to pick up a bit of prize-money and anything after that was going to be a bonus. We didn't really know where we were with him.

“This is probably the first year we've had a trouble free run with him the whole way through. He's just had niggly problems up to that but this year he hasn't missed a day. He's a stronger and better horse.

“I leave the plans up to my father but the Irish National was the plan; he's probably going to be too high in the handicap now but we'll get him home and see how he is.

“We were thinking maybe then going to Punchestown and looking for a bit of nice ground at the end of the season.”