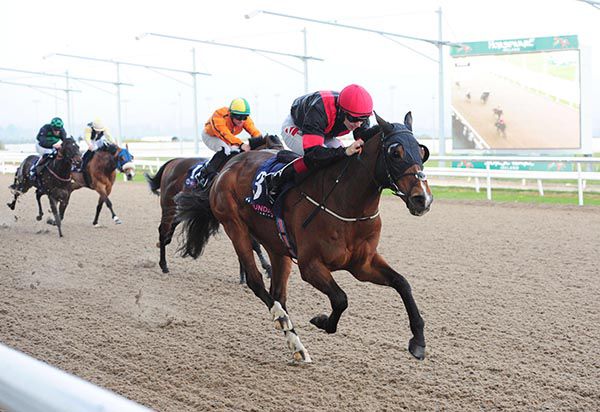 Kasbah justified 8/13 favouritism to win the Dundalk Business Club Claiming Race at Dundalk today as connections of the seven year old later enjoyed the added bonus of being successful with their own friendly claim.

Ridden by former Champion Jockey Colin Keane, the son of Acclamation was today scoring a fifth career success, which was his first for today's connections, when beating Hathiq by two and a quarter lengths.

Winning trainer Ado McGuinness later said “he’s been a bit frustrating but he ran well in Navan the last day and is owned by the Dooley brothers and our yard sponsor Bart O’Sullivan. It’s our first winner for them.

“I know we had to drop him back to a claimer to win but he’s won plenty of money all winter, and if we don’t lose him he’ll probably go to the likes of Chester as the lads are local to there and it would suit them. He’s a fun horse and if he’s claimed, he’s claimed.

“That fast six is probably his trip. He’s gone seven by dropping in and we haven’t chanced a mile yet. He’s even run well over five here. He’s a hold up horse and sometimes he doesn’t find a whole pile but tonight he did.”

Winner Kasbah and runner-up Hathiq were both claimed back by their same connections, while fifth-placed Downtown Diva was claimed for E6,000 by J A O’Sullivan to be trained by Adrian Keatley.