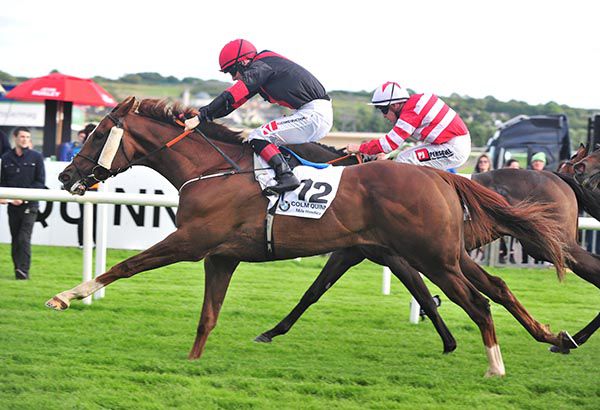 Colin Keane made it a Galway double as he swooped on Saltonstall in the featured Colm Quinn BMW Mile Handicap.

The five-year-old gelding made headway straightening up and thundered home from fully eighth a furlong down.

He surged home down the outside to pick up Innamorare close home to win by half a length at 9/1.

Colin Keane said: "He was a horse that was coming back to form on his last run (at the Curragh), so it was great to get this pot today for the lads.

"I thought we had everything covered as such behind us, it was just what was in front of us - Donnacha's horse (Numerian) was just after getting out and getting running.

"This lad was travelling well as he met the rising ground and he really powered up the hill."

Trainer Ado McGuinness said: "I can't believe it and it is great for the crew who have worked hard and for (owners) the Dooley brothers from Manchester and Bart O'Sullivan, who is also our yard sponsor.

"Today was a plan, some of these plans don't come out but this has come out and it is brilliant.

"Stevie (Thorne), my assistant, is brilliant at picking out these horses and picked him out at Goffs and we looked at him.

"He had had a few problems and had bled a few times, but he said he was a horse we could take a chance on and we always felt Galway was a fantastic place to be in, so we tried to get him up for Galway and it has happened."