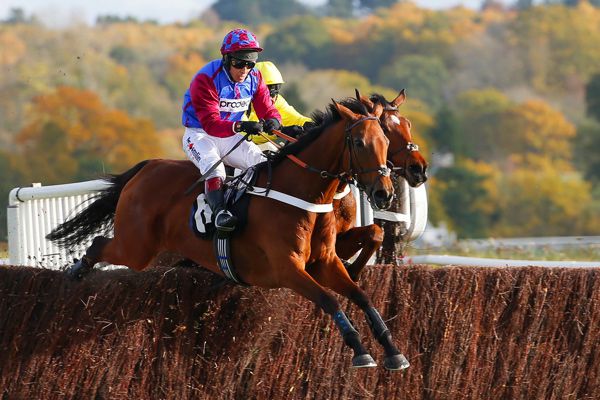 Warren Greatrex does not think the drop in trip will hinder La Bague Au Roi in the Flogas Novice Chase.

The mare is unbeaten since having her attentions switched to fences and beat current RSA Chase favourite Santini and Topofthegame in the Kauto Star Novices’ Chase at Kempton over Christmas.

That came over three miles and she faces three furlongs less in Ireland, but Greatrex thinks she is even better over the intermediate distance.

“I think this is probably her optimum trip actually, so I don’t see it being an issue,” said Greatrex.

“She’s a very clean jumper, she jumps very well and is not slow.

“I think the ground will be fine, the trip is fine, it’s obviously a very good race but she seems in very good form and, for me, it was worth a go.

“The yard is going well, we’ve had a fair few winners these last few weeks and everything is in place ahead of the big meetings. Thankfully she got there safe and sound as Lambourn is covered in snow.”

Her main market rival is Gordon Elliott’s Delta Work who, like La Bague Au Roi, is unbeaten in three over fences but he has two Grade One wins to his credit.

“He’s keen enough at home, but in his races he’ll never win by too far,” said Elliott.

“He won a Pertemps by a nose and won his beginners’ chase in Down Royal by three-parts of a length.

“He just does what he has to do. He’s a nice type of horse to train because you never know what’s underneath the bonnet, but he keeps winning.”

Elliott also runs Hardline who will be ridden by Davy Russell with Jack Kennedy on Delta Work.

Joseph O’Brien’s Mortal was second to Delta Work over Christmas having won on his chasing debut at Fairyhouse.

“I was over the moon with him. He jumped and travelled very well. It was only his second run over fences,” said O’Brien.

“The drop back to two-five might suit him as he travelled strongly the last day.

“We’re probably going to struggle to beat Gordon’s horse (Delta Work) but we’ll run, do our best and try to get a share of the money.

“Unfortunately I kind of know what’s under Delta Work’s bonnet. We were upsides him going to the last with Le Richebourg at Fairyhouse, but he missed it and he came back and beat him.

“I wouldn’t be sure Mortal’s mistake last time made any difference to the result at Leopardstown.”

Aidan Howard’s Winter Escape can not be discounted having won his last three, including when giving plenty of weight away to A Plus Tard in a Grade Three last time out.