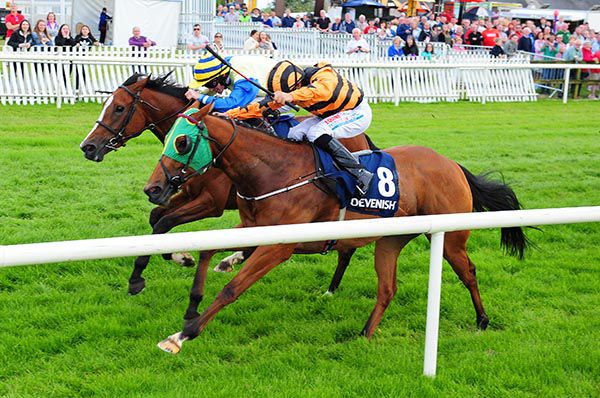 The Devenish Nutrition Fillies Handicap produced another cracking finish at Bellewstown this evening with Lady Scathach narrowly landing the spoils. Passing Trade made a bid for home passing the two furlong pole but was hunted down by Tom McCourt's charge inside the final furlong.

Niall McCullagh got a good run up the inner on the Zoffany filly and she had her head down at the right time as the pair flashed past the post together, recording a short-head victory.

The 15/2 winner was recording her third win of the season having also landed quick back-to-back wins at Gowran in May.

“It was very tight. I thought she was nabbed. I think she was headed and came back again,” said McCourt.

“Luckily enough they did a great job watering the track and she doesn't want it too quick, I'd say the softer the better.

“She's a tough filly and the nice handy weight there helped.

“Niall is riding with great confidence. He gave her a great confident ride and said he felt all the way that once he got the run he had plenty there.

“She made it difficult in Gowran as she hangs left. When she won first it suited as they came up the stand's side but going left-handed would definitely suit her better.

“We'll tip away and keep her going as long as she's well.”