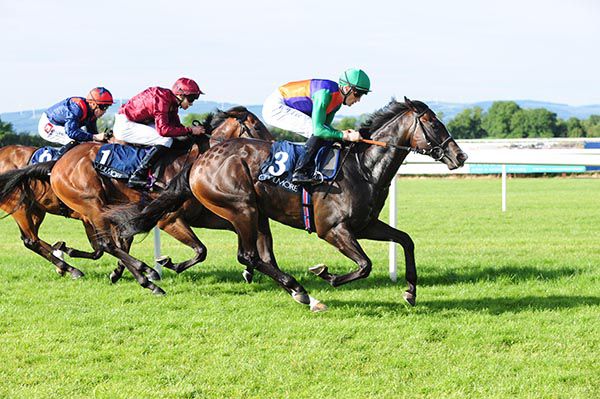 UK raider Strive For Glory made it four from four for favourite backers at Tipperary this evening, as he landed the Listed Coolmore US Navy Flag Tipperary Stakes.

Successful on debut at Newcastle in April, the Robert Cowell trained bay ran a cracker to finish fourth in the Norfolk Stakes at Royal Ascot.

He was 50/1 on that occasion, but went off the 9/4 favourite this evening with Billy Lee in the saddle.

Awkward away from the stalls, the American bred son of Dialed In raced behind the leaders on the outer.

He was ridden to challenge over a furlong from home and soon edged to the front, keeping on well in the closing stages to prevail by three parts of a length. Air Force Jet (7/2) finished second under Donnacha O'Brien for his brother Joseph, while Isabeau (25s this morning and from 10s to 6s on-course) was another half a length back in third.

Billy Lee said afterwards: "Robert said to take him down nice and handy but he was very relaxed. He jumped a bit slow and gave away a length so I ended up taking a lead which I didn't mind.

"Robert said to make it or sit handy and he travelled into it well. He was in front plenty soon enough but here on fast ground you're not going to keep sitting.

"I felt like he was doing enough going to the line and he has a bright future. He was fourth in a very good Norfolk and that's my first time riding for Robert."

The winner was bought for $80,000 as a yearling at Keeneland last September.

The Irish Horseracing Regulatory Board Veterinary Officer examined Illusionist (GER), trained by Archie Watson (in GB), at the request of the Stewards and reported the animal to be coughing post race.