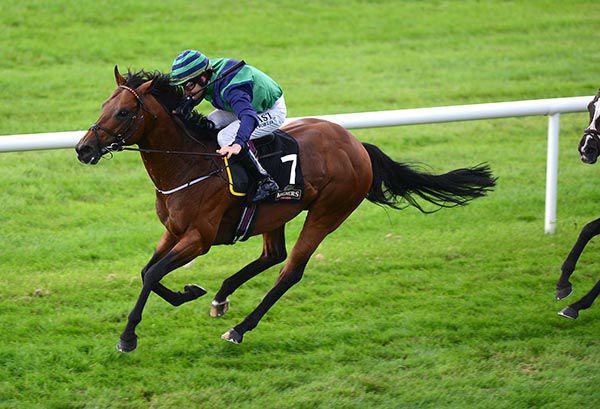 Abstraction won his first race in over six years when landing the Magners Irish Cider Handicap at Down Royal under Shane Foley.

Natalia Lupini’s charge was backed to do so as well, from 10/1 into 7/1, and he got the better of Aspen Belle by a length and a half.

"He is a horse very close to my heart. Since I bought him he's been my baby really. I'm delighted to see him winning for me, this is special for everyone in the yard. The owners love him," said Miss Lupini.

"It really is special because he had loads of problems, so it is great to have him back in the winners enclosure.

"Shane (Foley) was brilliant on him - best ride I've seen!

"He was a very good horse in his day, he has been coming down the handicap of course.

"I was expecting a good run and we said that everything that comes after that would be a bonus.

"He could go to Tipperary or Cork - he needs a flat, quick track. Hopefully the weather will hold up for Tipperary and Cork.

"I'm training in Loughbrickland (Co Down) and I have 11 in at the moment - a few young ones and a few handicappers."

At the request of the Stewards, P.A. Harnett, rider of Dandyman Port trained by D. Donovan, reported to the Stewards' Secretaries that his mount dwelt when the stalls opened.

At the request of the Stewards, C.D. Hayes, rider of Master Matt (GB), trained by Matthew J. Smith, reported to the Stewards' Secretaries that his mount reared up when the stalls opened and was slowly away.

Edward Lynam, trainer of Dapper Power reported to the Stewards' Secretaries that his charge burst a blood vessel during this race

The Irish Horseracing Regulatory Board Veterinary Officer examined Dapper Power, trained by Edward Lynam, at the request of the Stewards and reported the animal was found to have blood on the nose as a result of exercise induced pulmonary haemorrhage.