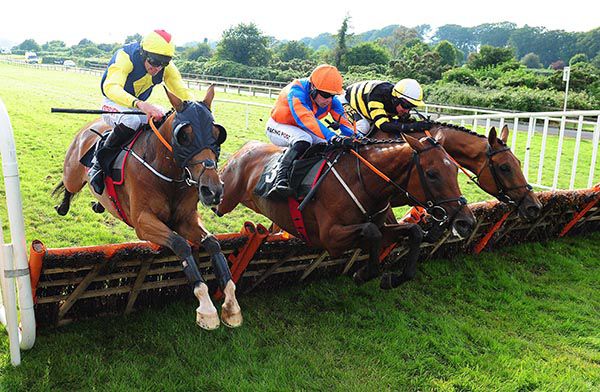 Only five went to post in the Byrne Marquees Hilltown Hurdle at Bellewstown but it produced a cracking three-way finish with Macgiloney just prevailing. Count Simon was sent off a 5/6 shot in the three-miler and took them along under Davy Russell.

He was tackled by Macgiloney and his stable-mate Make My Heart Fly after the second last and there was nothing between the trio over the final flight.

The favourite faded out of it on the run-in and it Macgiloney and trainer/jockey Denis Hogan who found a bit more in the closing stages to post a neck victory over Make My Heart Fly.

The winner had been backed from 5/1 this morning and went to post a 2/1 shot.

“That was brilliant. He was gutsy and loved the battle,” said Hogan.

“When I entered him I wasn't sure was I going to be able to run with the ratings but if you don't run them you don't win anything.

“I don't think the handicapper can react too much because I went through the form of the others and their ratings had maybe been got through good placing by Gordon.

“I didn't think in a handicap that they would have run to marks in the 130s.

“I'm thrilled with this lad. He's always had a big future and he's still improving all the time. Chasing will be the job long term.

“He's owned by some good guys, Michael Moloney, Pat Gilmartin and John Gilmartin. They've been with me a long time.

“He won a bumper here last year and he's been placed a lot of times. They've got some great days out of him.

“He'll go to Galway now, whether he runs in the three-mile handicap or the two-and-a-half novice. Killarney might come a bit soon.

“He's a nice horse to have going forward. He wants all of that three miles. We didn't go mad there so I had to get involved a bit sooner than ideal but it worked out well.”

The Stewards interviewed D.G. Hogan, rider of Macgiloney, concerning his use of the whip in the closing stages of this race. Evidence was heard from the rider concerned. Having viewed a recording of the race and considered the evidence, the Stewards were satisfied that D.G. Hogan was in breach of Regulation 10.3(i)(time to respond) and having considered his record, they suspended him for 2 racedays.