Mackqeez brings up Cork double for Lyons and Keane 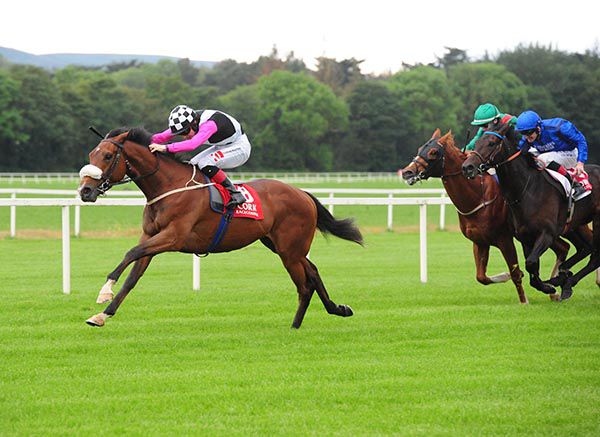 The Hothouse Flowers Play After Racing Maiden at Cork saw Ger Lyons and Colin Keane add to their Munster Oaks gains with Who's Steph as Mackqeez made a winning debut for the yard.

Formerly with Adrian Keatley the 5/4 favourite chased the leaders before leading over a furlong out.

From there he kept on well to go clear inside the final furlong, comfortably accounting for Halimi by three lengths.

"It was very straightforward and he is rated 97 so you'd expect him to be winning his maiden like that. He hit a flat spot turning in and I thought 'what the hell' but Colin said to go further and said he ran to his rating," commented Lyons.

"I'd have gone a mile with him but Colin called it right and said to go 10 (furlongs).

"I take no credit for it as I'm lucky to be in the right place - Adrian (Keatley, previous trainer) found and sourced the horse and bought a cracking horse and has done a grand job with him and we've just brought him along quietly. It's not nice circumstances but that is horse racing.

"He is staying with me and I seem to be gathering Hong Kong-based owners at the minute, rather than selling to them. It has been 20-odd years of selling to them so it is nice to have it this way around. They are lovely horses to have and most trainers will train these horses to win and I am lucky with my team of horses at the minute."

The Irish Horseracing Regulatory Board Veterinary Officer examined The Tooth Fairy trained by A.P.O'Brien, at the request of the Stewards and reported the animal to be post race normal.