Madden doubles his Dundalk score in the finale 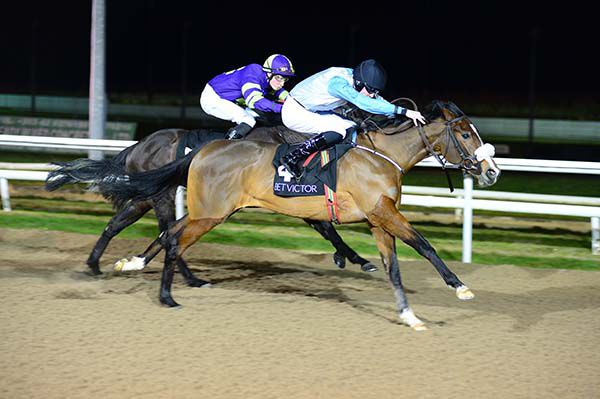 He'd earlier helped Ado McGuinness towards his treble by winning on Georgian Bay but Tom Madden's work on the night wasn't done with that success as he doubled up in the finale aboard Jessica Harrington's Calling Time (4s into 3/1 favourite).

This Over 1000 Games At BetVictor Casino Handicap was a seven furlong heat for three-year-olds and the progressive Calling Time added to her course victory over a mile here on November 16th.

Fourth since then, Calling Time got back to winning ways and she was chasing the leaders early.

Soon in mid-division, the Casamento filly was ridden to press the leaders two furlongs out. She was on terms a furlong and a half out and gained a narrow advantage a furlong out.

From there Calling Time kept on well under pressure to see off Burning Lake by half a length.

"She’s very straight forward and has been working well at home. She got 10lb for winning here before and is going to get another bit now but she’s improving the whole time," stated Madden.

The Irish Horseracing Regulatory Board Veterinary Officer examined Commodus trained by Joseph Patrick O'Brien, at the request of the Stewards and reported the animal to be post race normal.