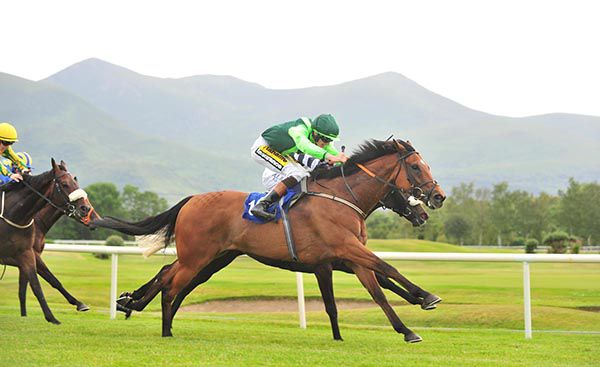 A loosening of the handicapper's grip saw Koybig bring up his sixth career success in the International Hotel Handicap at Killarney.

The seven-year-old gelding had dropped to a mark of 71 and Donagh O'Connor took a further 3lbs off. He had been as high as 83 last August.

O'Connor angled him out to come with a run in the final quarter of a mile.

The 8/1 shot picked up well and led narrowly over a furlong out. He was soon ridden and fended off Minnie Haha (5/1) by a neck. Angels completed the placings in third, a length and a quarter away.

Trainer David Marnane said: "We got him last year and Denis McGettigan wanted a couple of horses for friends of his and we had him in Dundalk last year, but I didn't think he was on the top of his game.

"He has had a break this year and has come back very well and had a good run at Limerick the last day (when third).

"There are a couple of options at Galway and while he hasn't run there, he'd suit Galway and looks like he'd come out of the dip well."