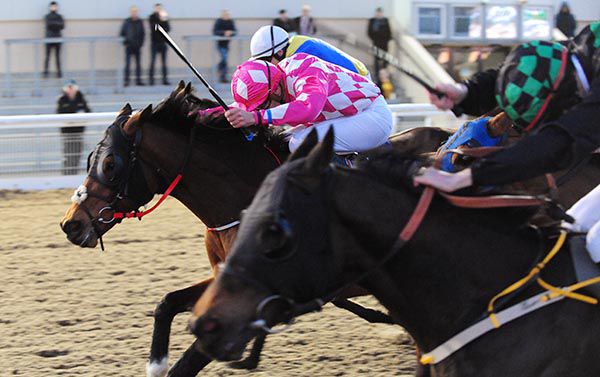 Ronan Whelan completed a double at Dundalk today as the Group 1 winning jockey landed the Coral Double Your Winnings Handicap on the John McConnell trained Bellick (9/1).

Little separated the principals in the closing stages and Bellick got up near the line to deny Ar Saoirse by a neck. A further neck and a nose separated the third and fourth placed horses.

“He ran very well from a bad draw over five the last day so we thought he had a chance but I thought it was a competitive heat.

“He got a great ride from Ronan so I'm thrilled.

“I did get worried for a little while with the horse in front but he does finish off well so I thought from a furlong home he was going to get him. I wouldn't quite say 'never in doubt'!

“A strong pace probably suits him. He wants six around here or a stiff five on the turf.

“He was a cheap yearling (E2,000 at Tattersalls September Sale) and he's won two now so we're delighted with him.

“We'll freshen him up and come back here or go to the turf. He handles good ground on the turf and doesn't want it too soft. We'll be selective but he doesn't owe us anything.”