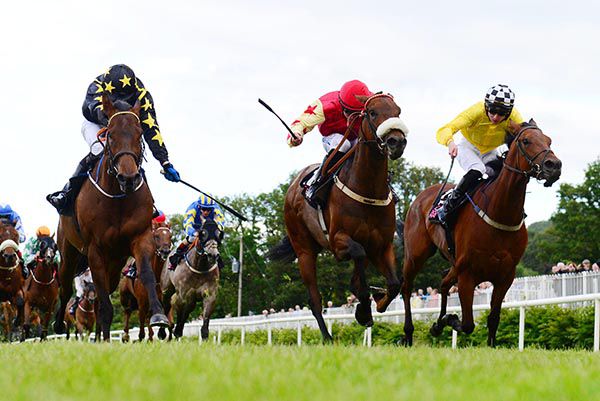 Noirvento, red cap, gets up between horses
© Photo Healy Racing

Noirvento rattled home in the closing stages of the Tote Supporting Irish Racing Handicap to give jockey Niall McCullagh an 87/1 double on the Sligo card.

The four-year-old filly got tight for room in third with 150 yards to race and was switched out.

She then flashed home down the centre of the track to get up in the final strides and pip May Remain by a head at 10/1.

The runner-up was an 11/2 chance. Guiding Star (25/1) came home well on the outside for third, another head away.

Niall McCullagh said: “It’s like buses, you’re waiting for ages and then two come along!

“I got stopped twice and the filly has done well to win. She’s honest and they should have a bit of fun with her.

"Tracey (Collins) was keen on her chances and I was lucky to get the ride. Her horses are in good form at the moment so fair dues to her.”