McGuinness & Madden on the mark with Piper 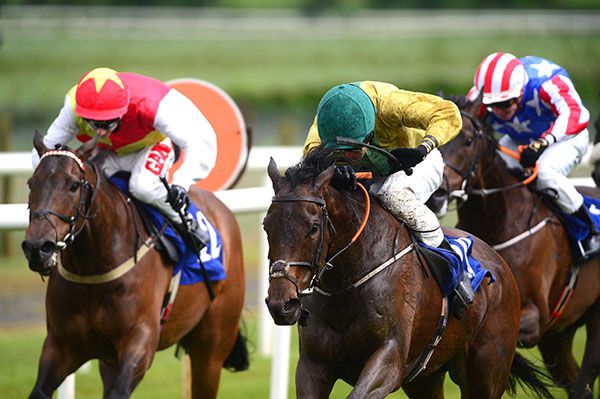 Piper Bomb recorded her second career success, as she took the first divide of the Ladies Day At Roscommon On Monday 8th July 2019 Apprentice Handicap.

Having recorded her first success in December of 2017, the Adrian McGuinness trained four-year-old failed to get her head in front in fifteen starts last year.

A close-up fourth at Wolverhampton in January, the daughter of Dandy Man was unable to make an impact on her two starts since, and was sent off at 10/1 this evening.

In front early, the Tom Madden ridden victor was eventually settled behind the leaders on the inner.

She was switched to the outer from the two furlong pole and was soon ridden, getting to the front inside the final 150 yards, before going on to score by two lengths. Harry Speed (9/2f), who led for much of the contest, had to settle for second under Andrew Slattery for Garvan Donnelly, while Fair Game (8s to 6s on-course and from 18s this morning) ran on well to take third, another half a length back.

McGuinness, who trains the winner for the We're Back Syndicate, said afterwards: "I knew she'd like a bit of juice in the ground and she had been the bridesmaid here twice before. She blew up in Gowran the last day and I knew she'd come on from it.

"She is a low grade handicapper and we'll find something else before the year is out. She is belonged to a group of lads who have been with me since 2006 and I trained the dam (Distant Piper) who won six or seven races. They bred her themselves so it is great."

The Stewards enquired into an incident about 150 yards from the finish involving Here In The Dark (GB), ridden by D.E. Sheehy, unplaced and Fair Game, ridden by G.M. Ryan, placed third, where it appeared that Here In The Dark (GB) checked when being passed by Fair Game. Evidence was heard from the riders concerned. Having viewed the recording of the race and considered the evidence, the Stewards advised G.M. Ryan to ride with more care.