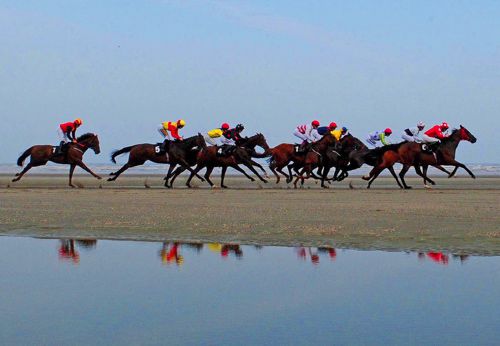 Melbourne 10 Racing's annual trip to the Co Meath venue has brought plenty success, and fantastic scenes, in recent years and had a stronger team of 14 horses assembled for today's meeting, seven of whom are trained by Jamie Osborne.

Today's initial 13 runners in the opening five races failed to hit the target but Commander Han was 11/10 favourite for the finale. However in the race, the 81 rated runner found little in the closing stages as 46 rated winner Confident Kid quickened past when scoring for McGuinness and winning jockey Tom Hamilton.

The win was also trainer Ado McGuinness' second success of the day, having registered a commendable 1-2-3 in the half hour earlier handicap and following his final winner he stated “Stephen Mooney, who works in the yard, is my new apprentice and his family own him with a few friends and we only have him about six or seven weeks.

“Stephen did a lot of the work with him himself and he's just settled in well.

“He was way wrong (at the weights) but he's a very well bred horse and cost a lot of money as a yearling. He has the class and was working real well. He was in Listowel but couldn't get in so we decided this was a good alternative.

“There was only five in it and I said to Tom 'don't take the good horses on, sit behind, ride him for a bit of luck and come at them with one run'. That's exactly what he did and the others lay down which is great! He have him a great ride.”

He quipped “I'm going to have a word with the handicapper now, I'll have to go and get him quick before he goes home!

“He can't kill him because beach form doesn't always work out.”