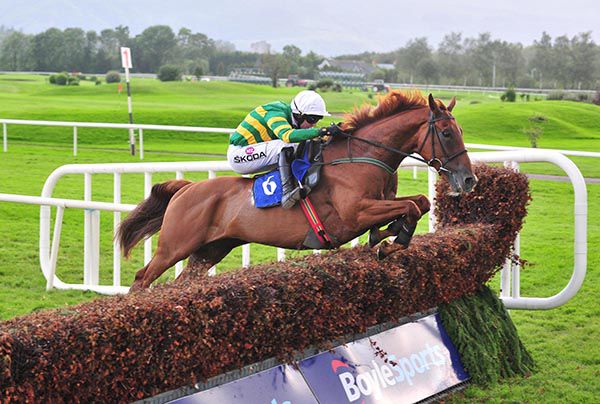 Mark Walsh made his first two rides back from injury, winners, helping boss J P McManus to a Killarney treble, brought up by Movewiththetimes (5/4 out to 7/4) in the Killarney Oaks Hotel Beginners Chase.

The money came for Eclat Des Mottes (5/2 into 13/8 favourite) but he eventually came home last of the six finishers.

On his second start for Enda Bolger, Galway Plate faller Movewiththetimes completed a double for the Limerick yard after their win half an hour earlier with Thatbeatsbanagher (J P McManus and Donie McInerney).

McManus’ other victor was Act In Time (Padraig Roche and Mark Walsh).

Former Paul Nicholls runner Movewiththetimes put it all together in the jumping department on his ninth start over fences to easily beat Charlie Stout by six lengths.

Walsh broke his right leg in a fall at the Punchestown festival in May but that didn’t stop him being at his polished best here.

"It was a confidence booster and we'll head to Listowel now for either one of the novices or the Kerry National. That was just what we really wanted," said Enda Bolger.

"In Galway, Darragh (O'Keeffe, jockey) said he jumped the fence perfectly but didn't get out the landing gear. He was on song today.

"He was second in a Paddy Power at Cheltenham so he knows the hurly-burly and it's not that he is a real novice. I don't know whether or not we'll take the safe option (in Listowel) before putting him into a big one again but they don't get any bigger than a Kerry National.

"He stays really well and Barry Geraghty, when I spoke to him before the Galway Plate, said to have him up there as he'll get home. He just didn't get the rub of the green in England and on the first day for us.

"I'll be pointed in the right direction by Mr McManus and Mr Berry!"

The Irish Horseracing Regulatory Board Veterinary Officer examined Eclat Des Mottes (FR), trained by W.P. Mullins, at the request of the Stewards and reported the animal to be blowing hard and also slightly lame when trotted on a hard surface post race.

P. Townend, rider of Eclat Des Mottes (FR) trained by W.P. Mullins, reported to the Clerk of Scales that his mount ran too keen throughout.

The Stewards interviewed I.J. McCarthy, rider of Tourboy concerning his use of the whip in the closing stages of this race. Evidence was heard from the rider concerned. Having viewed a recording of the race and considered the evidence the Stewards found I. J. McCarthy in breach of Regulation 10.3(G) and suspended him for two racedays.