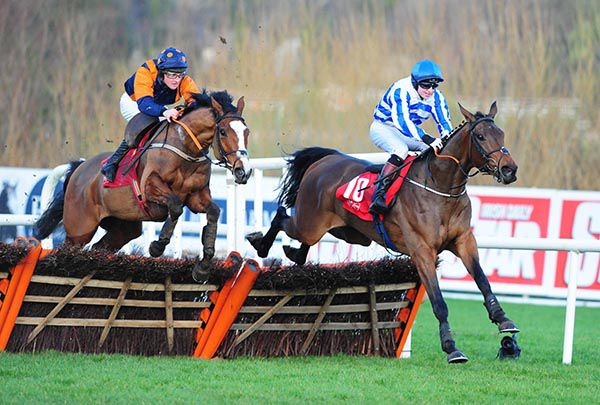 Conor McNamara rode his second winner of the Christmas period when giving Clash Of D Titans a fine ride to claim the novice handicap hurdle at Leopardstown this afternoon.

The 7lb claimer had the 12/1 shot prominent throughout in the two-and-a-half mile contest and he hit the front after the third last flight.

Gavin Cromwell's charge was sent for home turning into the straight and nicked a few lengths.

He had enough up his sleeve to repel the late challenge of Gallant John Joe and secure a length-and-a-half success.

“I'm delighted with that. He's owned by a local Skryne syndicate which I'm in myself and Paul Carberry is also in. Most of the lads are here so it's great,” said Cromwell.

“ I was very concerned about the ground coming here and wasn't sure if it was going to be soft enough for him so we made plenty of use of him and Conor gave him a smashing ride.

“He kicked four out and used his stamina.

“It was his first run over hurdles for me but he's been second in a maiden hurdle.

“He'll probably run in the final of this series at Fairyhouse.”