Midnight a welcome winner for Rothwell and O'Sullivan 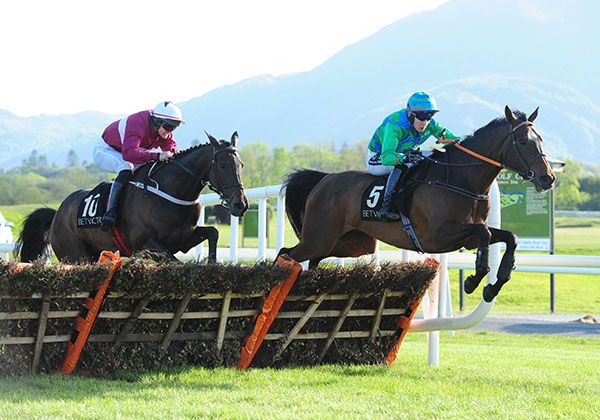 Trainer Philip Rothwell and jockey James O'Sullivan got on the first score-sheet for the first time since last autumn when Fiveaftermidnight came out on top in the Betvictor Mares Maiden Hurdle at Killarney.

The J J Leckey owned Fiveaftermidnight was good at the final flight helping her to see off Whatsdastory by three lengths.

"She didn't travel very well over 2m4f the last day and was a bit flat and we fancied her today as she was doing her best work at the line then," reported O'Sullivan.

"The ground is probably plenty quick enough today and I was always just barely travelling and in fairness she jumped like a stag. The further I was going the better I was going.

"She had the form in the book and she had been unlucky to be an eight race maiden coming into today."

The Irish Horseracing Regulatory Board Veterinary Officer examined Owenacurra Lass trained by Declan Queally, at the request of the Stewards and reported the animal to have blood at the nose following exercised induced pulmonary haemorrhage.

The Stewards interviewed A. McCurtin, rider of Whatsdastory, concerning his use of the whip in the closing stages of this race.

Having viewed a recording of the race and considered the evidence, the Stewards accepted that two of the riders strikes were for corrective purposes, but as the remaining strikes were above the number permitted, they found him in breach of Regulation 10.3(g) in that he had used his whip with excessive frequency.

Having taken his previous record in this regard into account, the Stewards cautioned A McCurtin on this occasion.

R.P. Treacy, rider of Minx Tiara trained by David M.O'Brien, reported to the Clerk of Scales that his mount was off the bridle early, but ran on again in the closing stages.