Monaco Rose proving to be a seriously shrewd buy 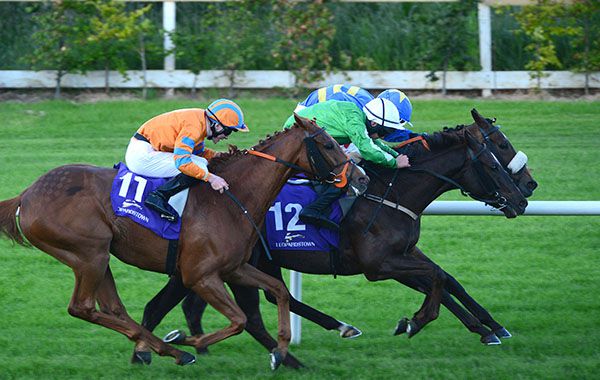 Leaving Cert student and apprentice jockey Andrew Slattery was briefly able to put the 2019 exams to the back of his mind, winning on Monaco Rose (6/1) in the Awards & Gifts Apprentice Handicap at Leopardstown.

‘Well-in’ under a mandatory penalty after winning at Down Royal last Friday, also under Slattery, Monaco Rose followed up for owner David Eiffe and trainer Dermot McLoughlin, but only just.

The Sir Percy mare, having her third outing for current connections, had to survive a steward’s enquiry after holding Walking On Glass (4/1 favourite) and Time For Mabel (7/1) by a nose and half a length.

Monaco Rose had briefly edged into Walking On Glass under a furlong out but Charlie O’Dwyer never had to stop riding on the runner-up.

It was no real surprise then when the judge’s placings remain unaltered.

Monaco Rose is doubtless proving a real delight to all involved having been purchased for 1,000 Euros back in November.

John M. Oxx, trainer of Agent Zigzag reported to the Clerk of Scales that he had declared his charge to run in cheekpieces which was not noted in this evening's racecard. Having consulted the official HRI declarations sheet published at 1215 on 5 June 2019, the stewards were satisfied that an error was made in printing this evening's racecard, and they therefore allowed Agent Zigzag to run in cheekpieces in accordance with Rule 194 (ii)(h).

The Stewards enquired into possible interference inside the final furlong of this race involving Monaco Rose (GB), ridden by A.J. Slattery, placed first and Walking On Glass, ridden by C.G. O'Dwyer, placed second, where it appeared that Walking on Glass was forced to check. Evidence was heard from the riders concerned, in the presence of Padraig Roche, trainer, accompanying C.G. O'Dwyer. Having viewed the recording of the race and considered the evidence, the Stewards made no alteration to the Judge's placings and took no further action.

The Stewards interviewed G.M. Ryan, rider of Time For Mabel (FR), concerning his use of the whip in the closing stages of this race. Evidence was heard from the rider concerned. Having viewed a recording of the race and considered the evidence, the Stewards the Stewards were of the opinion that G.M. Ryan was in breach of Regulation 10.3 (g), in that he used his whip with excessive frequency. Having considered his record in this regard, the Stewards suspended G.M. Ryan for 2 racedays and reminded him of his future responsibilities in this regard.

The Stewards interviewed C.G. O'Dwyer, rider of Walking On Glass, concerning his use of the whip in the closing stages of this race. Evidence was heard from the rider concerned in the presence of Padraig Roche, trainer. Having viewed a recording of the race and considered the evidence the Stewards were of the opinion that C.G. O'Dwyer was in breach of Regulation 10.3 (g), in that he used his whip with excessive frequency, and having considered his record in this regard cautioned him on this occasion.

J.M. Sheridan, rider of Tara Dylan trained by Thomas Mullins, reported to the Clerk of Scales that his mount never travelled and lost action.