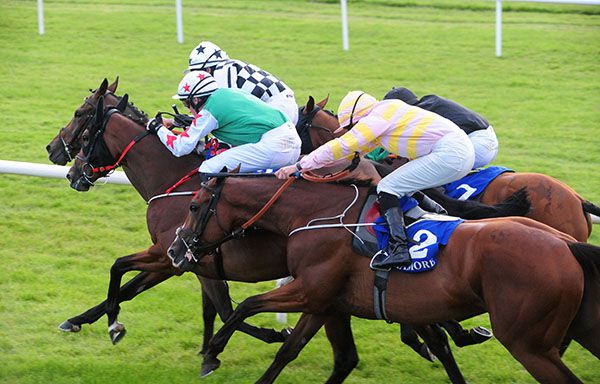 There will be celebrations in Monasterevin after the victory of Edification in the Hibernian Hotel Tramore Handicap this evening.

The gelding is trained near the Kildare town by Mark Fahey while pilot Ronan Whelan and owners Michelle and Derek Murray are also from the area.

Whelan produced the 3/1 shot with a strong run to lead inside the final furlong and record a two-and-a-half length win in the mile-and-a-half contest.

It was a third win of the year for the Dream Ahead gelding, who had also scored at Naas in late June and at Dundalk back in January.

“He did it well. He never makes things easy,” said Fahey.

“He didn't come down the hill but when he hit the rising ground he did it well in the end. Obviously the last couple of races horses are coming on the outside.

“He's in again on Monday, we'll have a think about it but probably not.

“Ronan gave him a brilliant ride and Conor Hoban was a big help as he told him what way the horse works, because he's not an easy ride.”