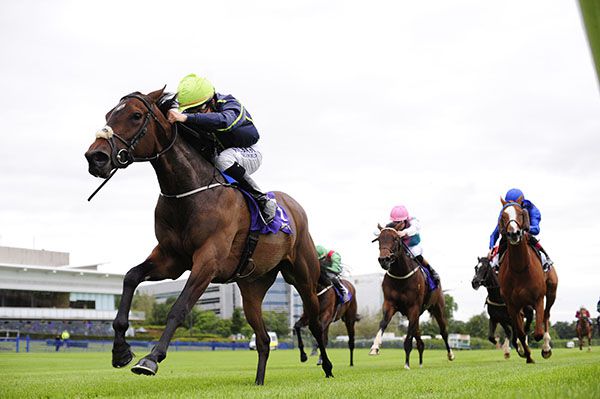 Morpho Blue got a deserved win to her name, as she took the Irish Stallion Farms EBF Fillies Handicap.

Just beaten a short head by subsequent Group 3 winner Happen, over the course and distance in October, the Jessica Harrington trained bay finished fourth on her return to action at Cork last month.

Sent off the 13/8 favourite this evening, the daughter of Mastercraftsman was prominent in the early stages, before eventually settling behind the leaders under Shane Foley.

She was switched to the outer to challenge a furlong and a half from home, and was pushed along to lead inside the final 200 yards, keeping on well from there to score comfortably by two and a half lengths. Time Tunnel (5/1) kept on to take second under Oisin Orr for Dermot Weld, while Mater Matuta (7/1), who led for much of the contest, was a neck back in third.

Harrington said afterwards: "She picked up well, they went quick and it suited her. Seven furlongs is about her trip but she'll get a mile.

"She is a good mover and any old ground suits her. Hopefully we'll get her up to Stakes company and that is the plan for her."