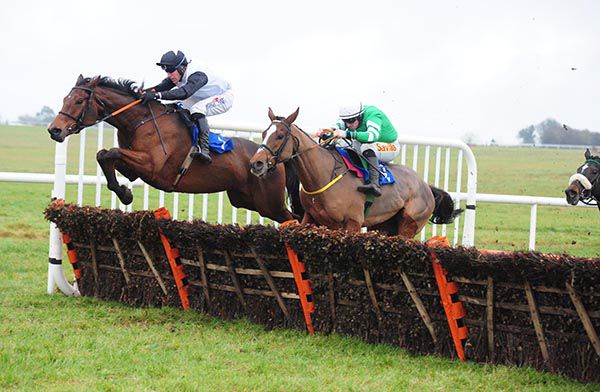 After a memorable day in the Robcour silks at Navan on Sunday when winning the Troytown, Robbie Power again struck in the pink white and black when successful pointer French Dynamite scored on racecourse debut in the Christmas Party Race Day Saturday 21st December Maiden Hurdle at Thurles.

A 165,000 pound purchase out of the Donnchadh Doyle yard after landing a Tralee maiden at the first time of asking in May, French Dynamite doubled in price for this assignment.

Despite taking a walk from 3/1 out to 6/1 beginning for the Mouse Morris yard, the French-bred youngster got the better of market-leaders Trevena and Pienta by a length and a quarter and half a length.

After his charge got it done from the front Morris said: "He couldn't have done it any easier and he is a big raw baby still.

"He is my type of horse, looks and makes, and hopefully he goes on from here. I couldn't be happier with him and I'm in no major hurry with him."

E. O'Connell, rider of Big Bad Loans trained by Eamonn O'Connell, reported to the Clerk of the Scales that his mount stopped quickly.

A. McCurtin, rider of Capall Iarann trained by John J. Walsh, reported to the Clerk of the Scales that his mount stopped quickly.

T. Ryan, rider of My Bonny Prince trained by William Hayes, reported to the Clerk of the Scales that his mount made bad mistakes at the first two hurdles.

At the request of the Stewards, R.J. Condon, rider of Comporta (GB), trained by John Joseph Hanlon, reported to the Stewards' Secretaries that he was instructed to drop out and get settled. His horse didn't jump the first few hurdles well, got outpaced down the back but stayed on past tired horses in the straight.

At the request of the Stewards, E. O'Connell, rider of Big Bad Loans, trained by Eamonn O'Connell, reported to the Stewards' Secretaries that his mount was badly left and didn't settle.