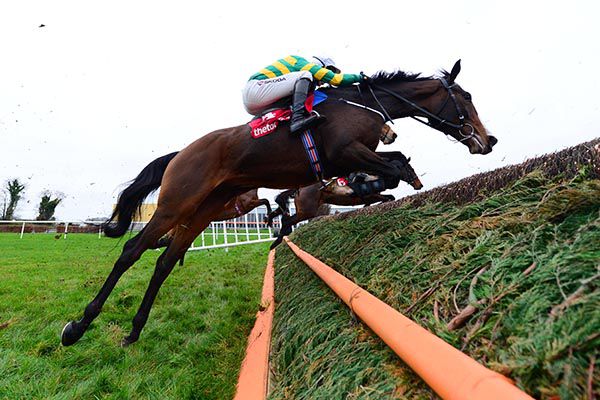 Shady Operator (11/4 into 7/4 favourite) got many punters off to a winning start in the Tote Supporting Irish Racing Beginners Chase at Punchestown.

Willie Mullins' pair Ballyward and C'est Jersey gave the J P McManus-owned and Joseph O'Brien-trained winner most to do but they eventually had to give best to the market-leader.

C'est Jersey stumbled on the run-in after being headed at the last and Shady Operator got there in time to 'short-head' Ballyward.

C'est Jersey ended up three and a half lengths back in third.

“He did well to win because he missed the last three and he had a bit of traffic as well,” said O'Brien.

“Mark was very happy with him and he jumped very well on the whole. It was his first time going the trip and I'd say he stays every yard of it.

“I'd say he'll step into a graded novice now, probably around that trip again.

“They are two decent horses that were second and third and he wasn't a bad horse over hurdles.”

The Stewards enquired into an incident in the closing stages involving Ballyward, ridden by P. Townend, placed second and C'est Jersey (FR), ridden by D.J. Mullins, placed third. Evidence was heard from the riders concerned. Having viewed the recording of the race and considered the evidence, the Stewards were of the opinion that any interference caused was accidental and took no further action.

The Irish Horseracing Regulatory Board Veterinary Officer reported to the Stewards that Kagney trained by Noel Meade was found to have blood at the nose following exercised induced pulmonary haemorrhage.

P. Townend, rider of Ballyward trained by W.P. Mullins, reported to the Clerk of Scales that his mount hung badly right throughout.

S.W. Flanagan, rider of Kagney trained by Noel Meade, reported to the Clerk of Scales that his mount burst a blood vessel and pulled up thereafter.