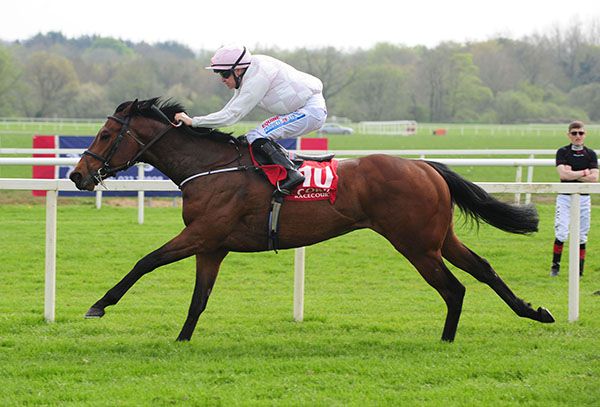 Slowly into stride when making a reasonable beginning to his career at Naas a week back with a sixth placing over six furlongs, Opening Verse came forward beautifully to win division two of the Buy Annual Membership Today Maiden at Cork.

Owned/trained and bred locally by John Murphy's Highfort Stud operation, Opening Verse was easy to back - 8/1 out to 12/1 on track - as he stepped up to seven furlongs.

Murphy, on the mark at Clonmel on Thursday with War Diary, employed Niall McCullagh for the spin on Opening Verse, and he soon had his mount at the head of affairs.

That approach took him all the way to a half length and length and three parts win over Limit Long (8s into 6s) and Super Treat (100s into 33s).

"We have always been very fond of this fellow. We were disappointed with him the first day and thought he'd be in the first three but he missed the break. He is very fast and I'd say he'll get better with better ground and he could be anything," said Murphy.

"We'll probably hold on to him for a while as we bred him and want to do best for the mare. His half-brother was third in the Qatar Derby and he is from a fast family. We will see what the handicapper does but might go for a black-type race straightaway with him."