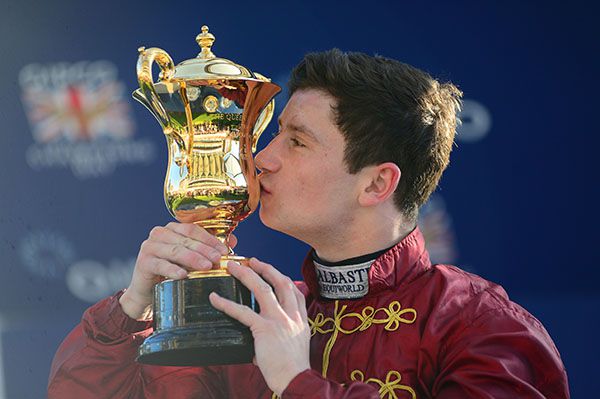 Deirdre came from way off the pace to win the Qatar Nassau Stakes at Goodwood and record a historic success for Japanese trainer Mitsuru Hashida.

Settled way off the pace by Oisin Murphy as Mehdaayih and Hermosa set a stiff gallop, the five-year-old stayed on powerfully to notch a famous overseas win.

Brought over to run at Royal Ascot, the Harbinger mare was undone by soft ground in the Prince of Wales’s Stakes and her connections took the brave decision to keep her in Britain for a while longer.

Although an unconsidered 20-1 chance, Deirdre had form against some of the best horses in the world, such as Almond Eye and Glorious Forever, and eventually ran out a clear-cut winner.

Ryan Moore was the first to send out distress signals on Aidan O’Brien’s dual Guineas winner Hermosa, who dropped away with three furlongs to run.

But at that stage Frankie Dettori appeared to have stolen a march on the John Gosden-trained Mehdaayih, who looked set to provide the red-hot trainer and jockey combination with another Group One triumph.

Deep inside the final furlong, though, Dettori’s mount had no answer to Deirdre, who won going away by a length and a quarter.

Murphy said: “I’m just glad they have brought a horse here and it has performed, because I’ve been saying since I’ve come back from Japan how they regard their horses and it is fantastic they have won a top-level Group One here.

“She is already a Group One winner, but it is nice to do it in England. I can’t tell you how pleased and thrilled I am for everyone connected.

“I had a lovely draw beside Mehdaayih and Ryan was just on my outside. I would have liked to have sat a bit closer, but I couldn’t go (the pace).

“There was no pressure on me, so I rode how I felt from instinct. Thankfully it paid off pretty well and I was able to use that fresh strip of ground.

“You can see she is an absolute queen, she is a big, masculine type of a horse and I’m not surprised she was able to carry the 60 kilos which is more than what she is used to.

“Hopefully we will see more of them coming now. She is by Harbinger, who we know very well — he was a world champion and this is a huge result.

“This is massive, I’m so pleased. I looked at her price, but I convinced myself she had a super chance as she worked brilliantly the other morning.”

Seiko Hashida Yoshimura, racing manager to owner Toji Morita, said: “This was a very big challenge here. We all could see she was trying hard at Royal Ascot despite the heavy rain.

“We were just hoping to see the best from her and that was today on this glorious sunny day. Everything was good.

“We are always believing in her, but the other horses in there were great, too. We had some good luck and all the people supporting us as well.

“We were not really sure if Deirdre would like the course, as it is undulating. I’m not sure what the plan is, we have to discuss that.

“She is a daughter of Harbinger and that is the reason we came to Ascot for the first time, but I think many Japanese people will be more interested in racing here and hopefully we can have a good influence on racing.”

Gosden said: “He (Dettori) looked like he got it, but the filly had been in front a long time and got a bit lonely. A nice filly came out of the pack and snuck up the rail and beat us.

“She has never been in front in her life, so it was a super performance. Frankie was happy to freshen her up and go for the Opera.

“If we are going to be beaten, I’m delighted to be beaten by the Japanese. I did (see her as a threat), as I’ve seen her training at Newmarket and I know from her form she is a real tough racemare and a real pro.

“They are the most charming people who own her. You have had two big results today for British racing in the charity race and in this.”