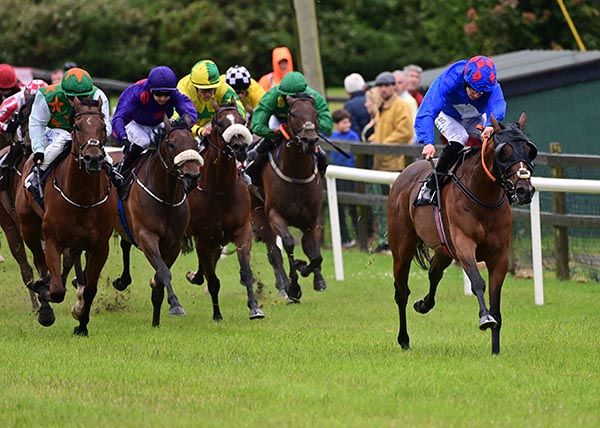 Offaly trainer Joseph Murray was on hand to see Mass Gathering give him his second career victory at Bellewstown this evening.

The 8/1 shot improved to lead over a quarter of a mile from home in the Inaugural Western Motors CUPRA Handicap over an extended five furlongs.

She was ridden clear approaching the final furlong and kept on nicely to hit the line three and a half lengths up on Kilonova (17/2). Teddy Boy placed again as he finished third at 4/1.

Murray said: "She travelled lovely. She's a good little filly, she won in Sligo and the handicapper gave her 15lb - I wouldn't give as much to the mother-in-law! In hindsight it was the best thing that ever happened.

"She ran a cracker in Sligo there and Gearoid Brouder gave her a lovely ride and she just got caught 10 days ago. I was going to leave her for Galway but she was kicking the door down so we like coming up here and taking a few pound off the Meath boys!

"I think she will go on to Galway - she will get the seven (furlongs). That would be the dream. I only have two wins, I only took the licence out last June. We were just feeling our way last year.

"Wesley (Joyce) is well worth his 7lb claim, he's a great little jockey and more than capable. I give all them young fellas a chance, they need a chance. In time to come they might be at the top and they won't forget me." Amazing Emma the 3/1 favourite, stumbled and unseated Colin Keane less than two furlongs from home. Keane walked away unscathed.