My Laureate blitzes her rivals as Keane doubles-up 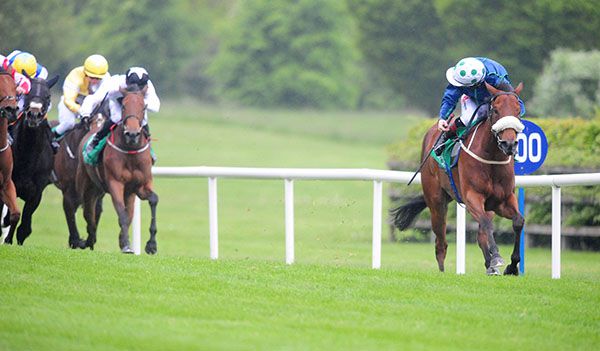 My Laureate blitzed her rivals in the Ladies Day At Navan 1st June Handicap, completing a double on the card for Colin Keane, who was earlier successful aboard Double Martini

An excellent second behind Cava on debut at Fairyhouse last season, the daughter of Rajj failed to make a significant impact on her next three starts, and was well-beaten when tried in Listed company.

Fourth on her return to action at Naas last month, the Ger Lyons trained bay was sent off at 4/1 this afternoon, dropping back in trip to five furlongs on what was essentially her debut in handicap company.

Sent straight to the front by Keane, she was pushed along and powered clear over a furlong from home, keeping on well from there to score by four and three parts of a length. Sundance Star (4/1) just held on for second, with the 11/8 favourite Empire State just a nose behind in third.

"She's like (her full-brother) Insayshable, (half-sister) Ainippe was sharper. This one is more Insayshable even though she's a speed horse, mind wise she's like him.

"The penny dropped with me, not her, in Naas that I just had to stick to the five and concentrate on five and let her do her job.

"She was on the wrong side last time and that's the annoying thing about Naas as they never had a draw bias there before until this year. I don't know why it's happening.

"This race fell and we thought she'd win this, if she did everything right, and she did and she won it.

"We'll see what the handicapper does, it'll be more of the same. Ideally with these sprinting types you'd like to get black-type. We are a long way off that but maybe as a four-year-old she might be that type."