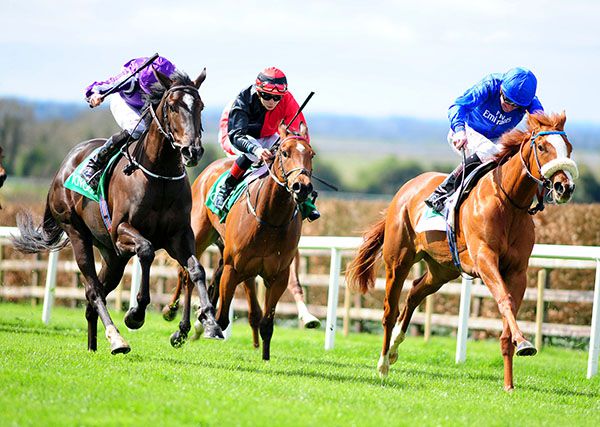 So Perfect bids to set up a trip to Royal Ascot with victory in the Goffs Lacken Stakes at Naas on Sunday.

The Scat Daddy filly ran at the big meeting in Berkshire last season, finishing a close fourth in the Queen Mary to Signora Cabello.

She then beat subsequent Moyglare Stud winner Skitter Scatter in a Group Three, before finishing placed in a brace of Group Ones and at the Breeders’ Cup.

On her return this year she was beaten just a head in the Fred Darling at Newbury, and drops back down to six furlongs for this Group Three contest.

“She had a lovely run in the Fred Darling at Newbury at the start of the season and we are bringing her back to sprinting with a view to going to Naas before possibly heading for the Commonwealth Cup at Royal Ascot,” said O’Brien.

So Perfect’s chief threat may well be the Ger Lyons-trained Inverleigh who beat The Irish Rover comfortably in a Listed event at Navan first time out this season.

One not to be underestimated, though, is Fozzy Stack’s Empire Line

In eight outings he has only been out of the first two once and that included last week at Naas when reeled in close home by stablemate Woody Creek.

“Empire Line was beaten by one of our own last week. He runs his race every day,” said Stack.

“This is another step up in class, but we’re getting to that stage now where he’s going to have to take his chance in races like this.”

Jessica Harrington’s Flash Gordon and Aidan Fogerty’s On A Session are others of interest.

The Coolmore Gustav Klimt race only has four runners — but all are previous winners.

“She is a grand filly and it’s great for her owner Carmel Delaney as this is her first horse,” said McCreery.

“I just don’t think the ground suited her first time out at Naas. She is a filly that wants quick ground, which she’ll get there this weekend. I couldn’t be happier with her at home and I think the five furlongs at Naas will really suit her.

“The horses are running well and long may it continue.”