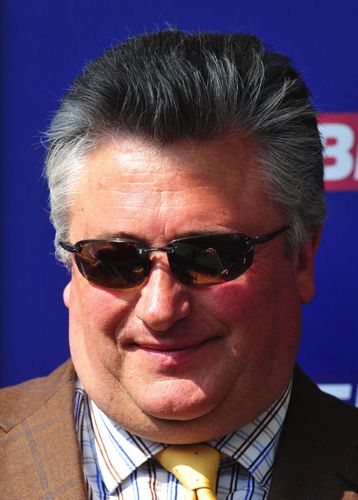 Paul Nicholls was thrilled to become only the third trainer in history to saddle 3,000 winners over jumps in Britain after Kupatana struck gold at Cheltenham.

The Ditcheat maestro won his 3,000th race overall when Capitaine scored at Taunton in February — a tally that included 25 in Ireland, four in France and 11 on the Flat.

Dr Sanderson provided Nicholls with his 3,000th British winner with victory at Ludlow at the start of the month, and on Thursday he joined Martin Pipe and Nicky Henderson as the only trainers to send out 3,000 winners over jumps in his homeland.

Nicholls told Press Association Sport: “People have obviously talked about the 3,000 winners we’ve already had, but this was the one we really wanted.

“It’s brilliant to do it and it’s extra special to do it at Cheltenham.

“It’s a great achievement for the the whole team. I’m delighted.”

Having run out a wide-margin winner on her latest appearance at Kelso, Kupatana was the 2-1 favourite for the EBF/Thoroughbred Breeders’ Association Mares’ Novices’ Handicap Chase Series Final at Prestbury Park.

Ridden by Harry Cobden, the 2-1 favourite dominated from the front and had enough in reserve when racing up the the famous Cheltenham hill to hold Little Miss Poet at bay by a length and a quarter.

Nicholls added: “It was a fantastic ride by Harry as she’s a tricky mare.”

Already champion trainer 10 times, Nicholls is set to claim the title for the first time since the 2015-16 season when the current campaign comes to an end at Sandown on Saturday week.

“I’m really looking forward to that (being crowned champion trainer). I honestly didn’t think we had a chance at the start of the season and to get the title back is fantastic,” said Nicholls.