Nolan doubles up with Crazyheart 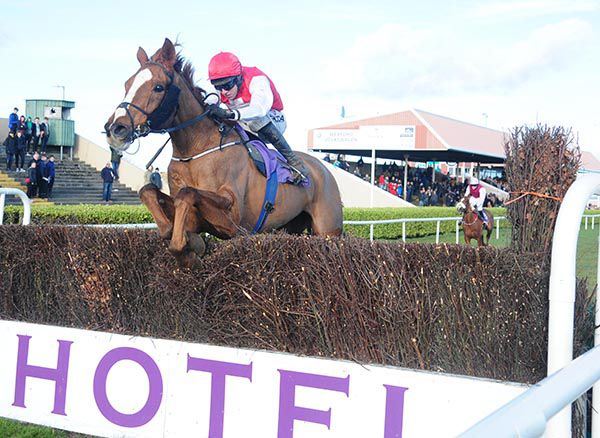 Crazyheart could afford to ease down in the closing stages to run out a cosy winner of the Barry Ennis Memorial Novice Handicap Chase at Wexford, giving trainer Paul Nolan a double on the card.

Like earlier winner Fine Theatre Crazyheart carried the colours of Kay Browne who owns the Alhaarth gelding in partnership with Anne Coffey.

Mark Walsh always had the 3/1 shot handy in the two-miler and he pressed front-runner Reach Up for most of the trip.

The eventual winner hit the lead turning for home and asserted over the last two fences. He was eased right up at the line to record a three-and-a-quarter length success as Cloudy Morning stayed on to finish second.

Walsh said:- "He did it well. I was taking a lead, but he was jumping so well that he took me to the front. I didn't want to disappoint him because I think he has been a bit of a monkey in the past.

“He was happy out in front, he was pricking his ears and winging fences. I'd said this type of track and races of this grade would be ideal for him."